England will bid to put their woeful showing in the Test series behind them when they take on Pakistan in the four-match one-day series which kicks off here on Monday, captain Alastair Cook said Sunday. 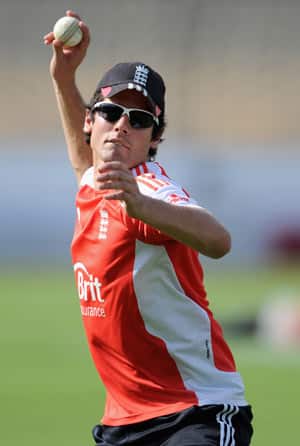 England will bid to put their woeful showing in the Test series behind them when they take on Pakistan in the four-match one-day series which kicks off here on Monday, captain Alastair Cook said Sunday.

Pakistan blanked England 3-0 in Tests on the back of superb performance from their spinners with Saeed Ajmal (24 wickets), Abdul Rehman (19) and Mohammad Hafeez (five) plaguing rival batsmen no end.

Pakistan have been further boosted by the return of leg-spinner Shahid Afridi who took five wickets in their seven-wicket win in the lead-up match against Afghanistan in Sharjah on Friday.

Cook, who took over as captain after the 2011 World Cup, suffered a 5-0 thrashing in India but hoped that loss and defeat in Tests against Pakistan were forgotten.

“It’s been a tough five weeks as a Test tour but this is now a different, fresh side and hopefully we can bring that enthusiasm into the game,” said Cook on Sunday.

“It was a while ago (losing to India) but we tried as hard as we could and we came up short against India. There’s no shame in that but there will be shame if we don’t learn from that.”

Cook hoped his team would better cope with Pakistan’s spinners.

“Certainly the one-day game dictates you have to be more positive and we’re not going to have men around the bat all the time so it changes your mentality as a batter, it frees you up,” he said.

“We’ve got a good record against Pakistan and have had success against these bowlers before in one-day cricket so hopefully, we won’t banish memories of what happened in the Test matches, but you get to free up a little bit and attack.

“They’re a confident team and winning breeds confidence. We’re not worried about what they do we’ll just try and do well in that first hour and Pakistan will do the same.”

Cook added that he was excited at the prospect of opening the innings with Kevin Pietersen.

“It went well. I think we got 90-odd together and it felt comfortable straight away,” said Cook of opening with Pietersen during the easy win over the Lions here on Friday. “It’s a new challenge for KP – and we both are excited.”

Pakistan may counter England’s ploy of using Pietersen at the top by opening the bowling with left-armer Rehman. Rehman opened the bowling in a World Cup match against Australia last year.

“Of course we do have plan for every game but the main plan is to do our basics well so we are going to stick to that,” said Pakistan captain Misbah-ul-Haq who has won 13 of the 14 one-day he captained since June last year.

Misbah said his team was confident after winning the Tests, but starts afresh in one-days.

“We are high on confidence but at times it is also harmful so we have to guard against that,” said Misbah, whose sole one-day loss came against Sri Lanka last year. “England are a good side, so we have to play tough, hard cricket to beat them.”