Off-spinner Graeme Swann, who on Saturday became only the 14th Englishman to claim 200 wickets in Test cricket, feels his team had a lot of tough work left to do before thinking about a win in the ongoing second Test against India in west India. 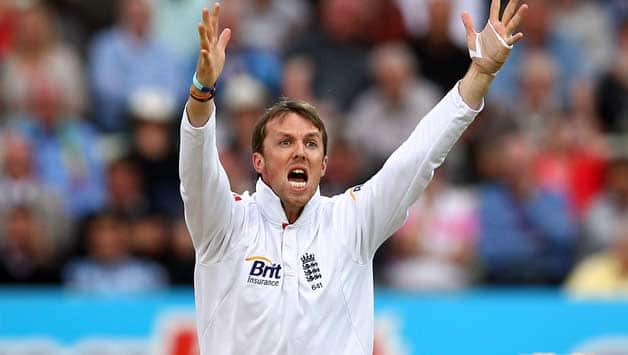 Off-spinner Graeme Swann, who on Saturday became only the 14th Englishman to claim 200 wickets in Test cricket, feels his team had a lot of tough work left to do before thinking about a win in the ongoing second Test against India in west India.

“I wouldn’t say we are in a particularly strong position in the game. We are in a good position but we are not at that stage where we can say that we will win this one. We have got a lot of hard work ahead of us,” said Swann, who accounted for four wickets, including three in 10 balls on Saturday.

Swann finished with fine figures of four for 70 to help England bowl out India for 327.

In reply England were 178 for two, 149 runs behind going into the third day of the game on Sunday.

“We are still 150 runs behind so we won’t be talking about milestones and centuries and things like that. We know we have to build as big a lead as possible, so that we can have a crack and win this game,” Swann said.

“Monty bowled magnificently yesterday. It was great to see. I am a big advocate of playing with two spinners. I love playing with Monty. I grew up in North Hampton when he was first starting and I just love it when he takes a wicket.

“That face like a man possessed when he got Sachin Tendulkar out yesterday, I have never seen a man so wound up like this one. He is brilliant,” he said.

Swann , who went past his countryman Jim Laker to become the first English off-spinner to complete 200 wickets, said he was extremely delighted with the milestone.

“No, five years ago I wouldn’t have dreamt of taking 200 wickets. I am absolutely over the moon the way my career has panned out. The change at the top was just at the right time for me. It has been a great four years, and I have enjoyed every minute,” he said.

Swann was effusive in his praise of his captain Alastair Cook and Indian batsman Cheteshwar Pujara, who have stamped their authority with their marathon knocks in the series so far.

“Cook is the new Don Bradman (if Pujara is the new Wall). Cookie is Cookie. I have said before the series that his batting could blossom as a captain as it did in the one-day arena, then we would be one lucky team. So far, he has proved thus.

“He has batted magnificently in the three innings he had so far and, touchwood, he has got a long way to go in this one (Cook was unbeaten with 87 at stumps today),” he said.

“Pujara has been the stand out batsman for India so far. He uses his feet very well and he plays the ball on the merit. I think the runs he scored speak for him. It was nice to finally dismiss him. It doesn’t normally take three innings of a Test series to get a man out but we have done it now so hopefully that has taken the finger out of the dough.

“He has got a game plan that works for him. He doesn’t hit the ball in the air, he hits it along the ground. He uses his feet very well. He is a fine player and he is in good form at the moment,” Swann said about the Indian.

Swann had Pujara stumped for 135, the first time the Indian batsman has been dismissed in three innings of the series.

Swann said it was a good track to bat once the batsmen get their eyes in.

“It’s good for batting, even though it has pace and bounce. Once you get the rhythm of batting on this pitch, it’s a nice wicket to bat on.

“We were lucky yesterday that Monty kept picking wickets every 45-50 minutes and you get a new man at the crease. That slows the run rate and it makes it harder to get set. The only guy who got set for India yesterday was Pujara. It showed that when he was in there for time, he was tricky to get out,” he said.

Ranji Trophy 2012: Goa in command on Day One against Kerala