England were left to fight hard to save defeat and with it the humiliation of a first-ever series whitewash at the hands of Pakistan in the third and final Test at Dubai Stadium on Sunday. 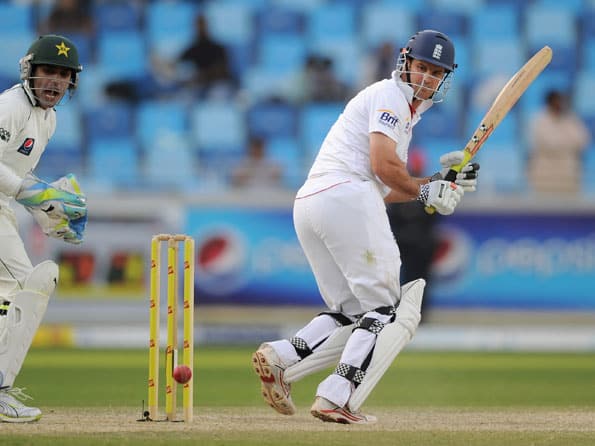 England were left to fight hard to save defeat and with it the humiliation of a first-ever series whitewash at the hands of Pakistan in the third and final Test at Dubai Stadium on Sunday.

Needing to chase their second best achieved target in all Tests of 324, England finished the third day at 36-0, with openers Andrew Strauss (19) and Alastair Cook (15) playing out the tricky 20 overs on an eased out pitch.

They still need another 288 runs with all ten wickets intact in the last two days. England’s most successful chase to win a Test was the 332 they made against Australia in Melbourne in 1929.

Pakistan could have got Cook’s wicket had Taufiq Umar not dropped an easy catch in the third slip off paceman Umar Gul when the England opener had made just four.

It will need an extraordinary effort from the England batsmen who lost the first Test here by ten wickets and the second by 72 runs in Abu Dhabi after their batting flopped against Pakistani spinners Saeed Ajmal and Abdul Rehman.

Both Pakistan spinners will test the England batting once again after Monty Panesar claimed 5-124 to finally bowl out rivals in their second innings on a pitch that saw 16 wickets fall on the first day.

“We are 100 percent confident of a win,” said Ali. “But having said that we have to take ten wickets and for that we look to our spinners who have done really well in the series.”

But spinner Graeme Swann hoped England can achieve the target.

“It could have been a tricky few overs for the openers but they played out and hopefully it’s a good chase tomorrow,” said Swann who praised Panesar for derailing the opponents.

Pakistan were well placed at 331-4 before losing their last seven wickets for a mere 34 runs following good bowling from Panesar and Swann, who finished with 3-101.

Pakistan owed their total to a brilliant career-best knock by Ali and Younis’s brilliance. Together they added 216 for the third wicket in a frustrating stand which almost plunged England into submission.

Ali became the ninth wicket to fall, when he gave a bat-pad catch to Cook at short-leg off Swann. He hit ten boundaries and six during his long stay at the crease which was seven minutes short of nine hours.

Ali’s previous best first class score was the 153 he made for Khan Research Laboratory against Sui Gas in Rawalpindi in 2009 while his best Test score of 100 came against Sri Lanka at the same venue in October last year.

Dropped on 84 by Swann in the slips off James Anderson, 26-year-old Ali hit Panesar for two boundaries in successive overs to reach the three-figure mark.

Resuming at 222-2, Pakistan lost Younis to a leg-before dismissal to Stuart Broad. Younis challenged Australian umpire Steve Davis’s decision but on review he had to leave the field.

Younis hit 12 boundaries and a six during his 221-ball knock.

Pakistan were 295-3 at lunch but lost cluster of wickets to Panesar, who trapped Misbah (31) and Asad Shafiq (five) to check Pakistan’s progress.

Panesar then bowled Adnan Akmal (nought) to further make inroads into Pakistan batting. From the other end Swann had Abdul Rehman (one) and Ajmal ((one) in successive overs and then wrapped up the innings by claiming Ali and Umar Gul (four). (AFP)