England captain Alastair Cook insisted he did not care which side his team faced in the semi-finals of the Champions Trophy after they booked their place in the last four with a 10-run win over New Zealand in Cardiff on Sunday. 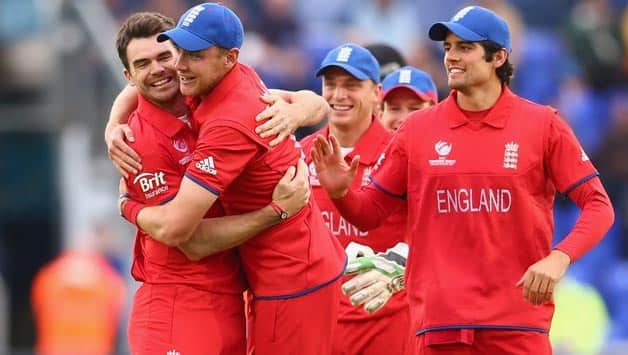 England captain Alastair Cook insisted he did not care which side his team faced in the semi-finals of the Champions Trophy after they booked their place in the last four with a 10-run win over New Zealand in Cardiff on Sunday.

England top Group A ahead of Monday’s final match between defending champions Australia and Sri Lanka at The Oval.

If England finish as pool winners they will face South Africa at The Oval on Wednesday but if they are pushed down into second place they’ll be up against Group B winners India, the only team in the competition with a perfect played three, won three record, in Cardiff on Thursday.

“We don’t mind who we play. We are just glad we are in there. We look forward to the semi-final against whoever that might be,” said Cook.

Had they lost, England — yet to win a major 50-overs competition — would have gone out of the tournament.
Cook was named man-of-the-match after he top-scored with 64 in a total of 169 all out in a clash reduced by rain to 24 overs per side, although the left-handed opener was dropped on 14, 37 and 45 by Nathan McCullum before the off-spinner caught him off his own bowling.

“The ball kept following him around, he’s a brilliant fielder and today [Sunday] he dropped a couple but he’s still up in terms of his fielding ability,” said New Zealand captain Brendon McCullum, Nathan’s younger brother.

Meanwhile Cook added: “It was great to get the opportunity to keep it in our hands today particularly with the rain about.

“We got a competitive total in the end and I thought we bowled pretty well…24 overs, it is a nerve-wracking time for a captain.”

New Zealand slumped to 61 for five but Kane Williamson (67) and One-Day International debutant Corey Anderson (30) kept them in the hunt with a partnership of 73 before they both fell in the closing stages.

The Black Caps needed 35 off 17 balls with five wickets standing when Williamson holed out off seamer Stuart Broad to James Anderson at extra-cover.

However, England had to endure a nervous wait after umpire Rod Tucker, who had not signalled a no-ball, asked fellow Australian Steve Davis, the television umpire, to check if paceman Broad had over-stepped.
It was a close call but Davis decided Broad’s delivery was legal.

“Broady said it might be close. I did not realise it was quite that close,” said Cook. “I think on those decisions you have to go with the umpire’s call on the field. If he [Tucker], had given it as a no-ball I don’t think we could have had many complaints.”

Defeat left New Zealand hoping for an Australia victory over Sri Lanka — if the Lankans win the Black Caps will be out of the tournament — but only by a sufficiently small margin not to overtake their net run-rate advantage, with the Kiwis currently at +0.78 compared to the Aussies’ -0.96.

“We had an opportunity today [Sunday] and we passed it up, we can’t be upset. If we do get another opportunity, who knows?”

And he refused to criticise the umpires over the lack of a no-ball reprieve for Williamson.

“It was close, but I didn’t have problems with the benefit of the doubt to the bowler.”

He added: “It’s testament to the way Kane and Corey played that we got as close as we did. For a little while, I thought they were going to get it done.”