James Anderson is set for an England return after being named Sunday in a 12-man squad for the third and final Test against Sri Lanka at the Rose Bowl starting on Thursday, June 16. 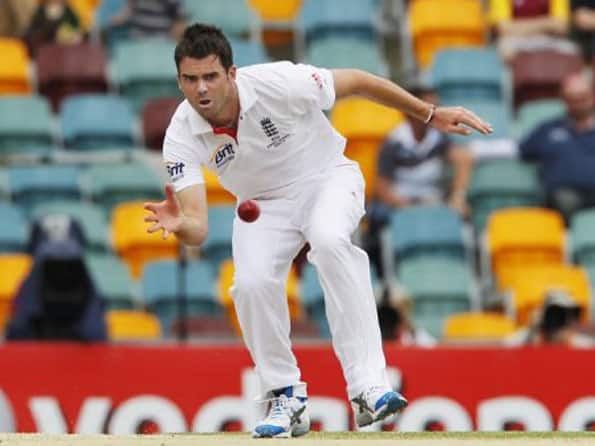 James Anderson is set for an England return after being named Sunday in a 12-man squad for the third and final Test against Sri Lanka at the Rose Bowl starting on Thursday, June 16.

England’s premier strike bowler, who missed the drawn second Test at Lord’s with a side strain, replaced the uncapped Jade Dernbach, who was drafted into the squad in his absence.

Officials wanted the 28-year-old Anderson to prove his fitness playing for Lancashire in a Twenty20 match against Worcestershire later Sunday. But that fixture was washed-out without a ball being bowled. It left England having to assess Anderson’s fitness on the basis of pre-Test training sessions alone.

However, England national selector Geoff Miller, speaking before the county match was abandoned, said: “Side strains can be particularly troublesome for bowlers but given Jimmy’s injury was a grade one strain and therefore a low grade injury, he is expected to be fit for selection.

“We obviously wouldn’t include Jimmy in the squad if the medical staff weren’t confident of his fitness,” the former England off-spinner added.

England’s four-man attack struggled for accuracy without Anderson at Lord’s. Either Steven Finn, who took the swing specialist’s place in England’s XI at Lord’s, or the under-performing Stuart Broad would appear to be in line to make way if Anderson plays in what will be the first Test ever staged at the home ground of southern county Hampshire.

“He (Anderson) bowled extremely well (in the first Test) at Cardiff and is a fine, top-class bowler,” Miller told BBC Radio Five.

“You always miss quality bowlers. But it is not just about one individual — it’s about a squad of bowlers and people coming into the side for injuries. That is what we are all about – strength in depth.”

Miller added Anderson had skills distinct from those possessed by the trio of 6ft 4in plus seamers — Chris Tremlett, Finn and Broad — selected at Lord’s.

“Jimmy (can make it) pitch up and swing,” he said.

“The others are tall bouncing bowlers and you are always looking for options because conditions alter and change, and sometimes you need that difference.”

Broad has taken six wickets at an expensive 48 runs apiece in four innings so far this series but Miller said a return to form was “just around the corner” for a fast-medium bowler who is proving himself to be a highly adept lower-order batsman as well.

And that would appear to indicate Finn is the more likely of the pair to make way for Anderson, even though he took four first innings wickets at Lord’s.

Meanwhile Miller was encouraged by the way in which Kevin Pietersen showed a return to form with his second innings 72 at ‘the home of cricket’.

“Kevin Pietersen is a top-quality player — we know that. He has had a tough time. He’s had a bad run. He knows he can score runs internationally and has again just proved that.”

England lead this series 1-0 after an innings and 14-run win at Cardiff.