Moeen Ali was batting on 45 at the end of the session, looking set to bring up his fifth Test fifty.

Kagiso Rabada recorded his best Test figures as England went into tea at a score of 318 for eight against South Africa on Day Three of the fourth and final Test at Centurion on Sunday. Rabada took the wicket of Ben Stokes to pick up his sixth wicket of the innings, a first in his brief Test career so far. Chris Woakes was then dismissed by JP Duminy for 26 in the latter’s first over of the match, causing England to lose their eighth wicket with 295 on board. England however, produced a much better performance in the second session compared to the first, in which they lost four wickets in quick succession. Moeen Ali hit a boundary off Dane Piedt in the 89th over to take England’s score to 278, helping the tourists avoid a follow-on, later bringing the 300 up with a hook off a short ball of Morkel.  The visitors still trail South Africa by another 157 runs at the end of the second session. LIVE CRICKET SCORECARD: South Africa vs England 2015-16, 4th Test at Centurion, Day 3

England resumed play in the second session on a score of 211 for six, only for the players to rush back to the pavilion soon after due to a brief spell of rain. After a loss of about 30 minutes or so due to the passing shower, Stokes and Ali began to do the repair-work for the Englishmen after the damage caused by Rabada towards the closing stages of the previous session. Stokes was beginning to show his familiar aggression and arrogance, which has made him the leading run-scorer in the ongoing series so far, hammering a four and a six off Piedt in the 81st over. LIVE CRICKET UPDATES: South Africa vs England 2015-16, 4th Test at Centurion, Day 3

Rabada was then handed the new-ball in the following over, and he put it to good use, bowling a perfect delivery to Stokes between middle and off and on the right length as Stokes got a leading edge to Hashim Amla in the slips while looking to push it to the covers. He departed for a 29-ball 33, leaving the responsibility of guiding England past 300 on the shoulders of Moeen Ali and the remainder of the English tail. 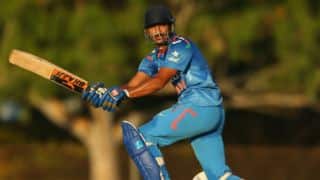