The series defeat means South Africa have been dethroned from the No. 1 rank in Tests!

England coasted to a comfortable seven-wicket victory over South Africa in the third Test at Johannesburg to gain an unassailable 2-0 series lead. Alex Hales (18 off 46 balls), Nick Compton (0 off two balls) and skipper Alastair Cook (43 off 70 balls) were the casualties for England during this period, with Cook leading the way with the bat to help his side breeze past the lowly target. It was fitting for Joe Root, who saved England from the blushes in the first innings with a brilliant hundred, to hit the winning boundary! South Africa’s surrendering of the series means that they have been dethroned from the top of the ICC Test rankings, with India occupying that position right now. The victory also means that England continue to remain unbeaten in a Test series in South Africa since 2005. SCORECARD: South Africa vs England 2015-16, 3rd Test at Johannesburg, Day 3

Cook hit seven boundaries during his stay at the crease, displaying the elegance that he was yet to show in the ongoing series so far. The South Africa seamers, who were in fierce form in the early part of England’s first innings, were unable to get the early wickets that would have given them some hope after the mauling in the second innings off the bowling of Stuart Broad. South Africa have now lost their second-consecutive Test series, having lost the four-match series in their tour of India by a 0-3 margin! UPDATES: South Africa vs England 2015-16, 3rd Test at Johannesburg, Day 3

Hales was trapped leg-before wicket off the bowling of part-time left-arm spinner Dean Elgar, with England needing another 10 runs to win. England were just one hit away from victory, and Compton attempted to hit the winning six by coming down the track to Elgar. The in-form No. 3 batsman got a bottom-edge instead, and Morne Morkel took a fine running catch at mid-on for Elgar to get his second wicket!

Cook was dismissed with just three runs left for the visitors to win, getting a nick off a Chris Morris delivery to wicketkeeper Dane Vilas to depart for 43. Root however, finished things off for England with a boundary towards midwicket off Elgar as the England dressing room and the ‘Barmy Army’ (the England supporters’ group) broke into celebrations.

The match was poised evenly at the start of the day, and it was but a single session that turned the game around its head and sealed South Africa’s fate. Resuming from their overnight score of 238 for five, England managed to finish on a score of 323 thanks to Jonny Bairstow’s 84-ball 45. South Africa went into lunch at a score of 16 for no loss, and the folks at the Wanderers had no idea about the storm that was about to hit them.

Then came that one spell in the second session of the day — the fiery spell from Broad that saw him take five wickets for just one run! Broad got rid of both the openers before getting rid of the big runs in skipper AB de Villiers and Hashim Amla that set off the alarm bells for the hosts. Broad got rid of Temba Bavuma, who scored a brave century at Cape Town, to finish the spell with figures of 10-6-14-5.

The damage was pretty much done by then, and the rest of the South African batting order falling like nine pins to the likes of Ben Stokes and Steven Finn, before Broad returned one last time to dismiss Faf du Plessis for 14. collecting his sixth victim and ending the South African innings on a paltry score of 83, the latter’s second-lowest since readmission as well as the second-lowest at the Wanderers. The magical spell by Broad was reminiscent of his carnage at Trent Bridge in the fourth Test in the Ashes 2015, where he took 8 for 15 to bowl Australia out for a meagre 60! 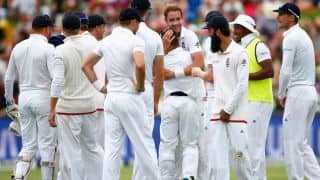