The report named Varun Chopra and Sam Robson as future of England cricket.

A British report looks at some suitable solutions for rebuilding the uncertain England team set-up following their 5-0 Ashes humiliation, the sacking of Kevin Pietersen, the retirement of Graeme Swann, the step-down of Andy Flower, Jonathan Trott’s burn-out and a collective loss of form.

According to The Independent, only four names – captain Alastair Cook , Ian Bell, James Anderson and Stuart Broad – can be regarded with any confidence as safe from the overhaul certain to take place once a new coach is installed.

The report mentioned that along with Cook, the selectors should be looking closely at Warwickshire opener Varun Chopra and Sam Robson, the Australian-born Middlesex opener, as Cook’s opening partner instead of the incumbent Michael Carberry, who did not make a compelling case for himself in Australia.

If Trott continues to struggle despite his comeback for the County Championship, the report said that Bell might be asked to move up from No 5 along with Nick Compton, although the latter will need to begin the season strongly, adding that Eoin Morgan and Nottinghamshire’s James Taylor are strong contenders to replace Pietersen.

Although Matt Prior is adamant that the dip in form that saw him dropped in Australia need not end his England wicketkeeping career, the report said that Jonny Bairstow is under pressure to prove his worth both as a batsman and wicket keeper and Jos Buttler’s move from Somerset to Lancashire will be also of benefit.

The report said that Yorkshire’s Azeem Rafiq and Kent’s Adam Riley are two young off-spinners worthy of close attention in order to replace Swann while Lancashire left-armer Simon Kerrigan has many supporters despite his nightmare Test debut. 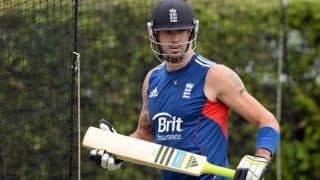