England's stand-in Twenty20 skipper Eoin Morgan said that his team will carry the confidence of 2-1 Test series victory over India into the two-match T20 series, commencing at the Subrata Roy Sahara Stadium on Thursday. 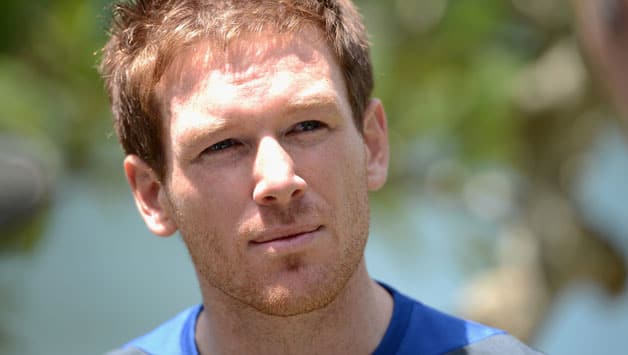 England‘s stand-in Twenty20 skipper Eoin Morgan said that his team will carry the confidence of 2-1 Test series victory over India into the two-match T20 series, commencing at the Subrata Roy Sahara Stadium on Thursday.

“As you have seen in the past when the Test side has done well it has a knock-on effect. We certainly will take the confidence from the Test victory and look to win the next two games,” said Morgan.

The 26-year-old middle order batsman got the opportunity to lead the side after regular captain Stuart Broard, who was also a part of the Test squad, suffered a heel injury and flew home at the end of the rubber.

“It’s a big opportunity for guys like me, Bressie (Tim Bresnan) and Samit (Patel) to perform again. It’s going to be mayhem tomorrow and in Mumbai in three days’ time. So, performing under pressure is what the selectors want to see,” said Morgan, who has played for Royal Challengers Bangalore and Kolkata Knight Riders in the Indian Premier League.
While Bresnan and Patel played in a couple of Test matches against India in the four-match series, Morgan did not get a chance to play even in one.

“It’s a great opportunity for me in these two games against one of the best sides in the world in their backyard.

It’s a challenge and I am looking forward to it.

“Being the vice-captain of the T20 team you are always prepared to take over (if needed). I am quite happy to take the reins,” he insisted.

Morgan said though he did not play any Test, he had practiced with the triumphant squad and has gained confidence from the series victory.

“I have had a lot of practice over the last two months (with the Test squad). And being part of a successful squad has given me lot of confidence because you are always fighting to play in a winning team,” said Morgan, who has played 16 Tests, 86 ODIs and 30 T20 Internationals.

Morgan said that the new players in the T20 team, following the departure of the Test specialists, have brought in more energy.

“The new guys generally bring a bit more energy, so we have to pick that and take it into the game. My expectations from the guys are quite simple…show courage and skill.”

He said that the team had learnt a lot from their disappointing show in the World T20 championship in September in Sri Lanka.

“Sri Lanka was certainly a bit of a disappointment. We did not perform to our expectations in the crucial games. It was a learning curve. The young guys have fantastic potential and would hopefully perform over the next 4-5 days,” he said.

Keep things simple will be my message to the (young) guys.”