Rahul Dewan stood tall with an unbeaten hundred before Haryana folded for 333 against England XI at tea on the third day of their four-day practice match. 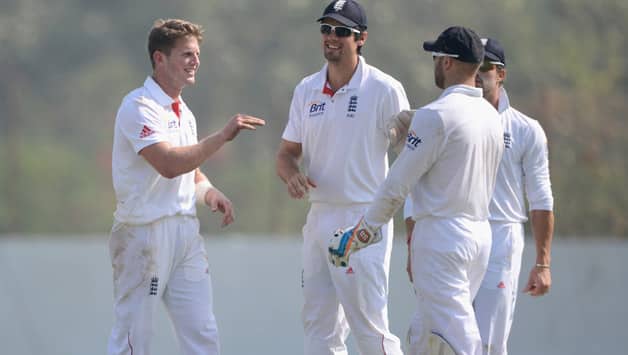 Rahul Dewan stood tall with an unbeaten hundred before Haryana folded for 333 against England XI at tea on the third day of their four-day practice match.

Pacers Tim Bresnan and Stuart Meaker picked up three wickets apiece as Haryana ended 188 runs behind the visiting side.

Rahul’s 320-ball 144 stood out in the Haryana scorecard, in which the only other knock of relevance came from number three Sunny Singh (55).

Reduced to 256 for seven at lunch, Haryana managed to cross 300 after Chanderpal Saini contributed 35 runs, which included seven boundaries.

He shared an important 60-run partnership with Rahul, frustrating the visiting bowlers for quite some time.

In the pre-lunch session, responding to the visitors’ first innings total of 521, Haryana were done in by a middle-order collapse despite the strong start they made yesterday.

Resuming at overnight 172 for four, the fall of wickets started pretty early for Haryana as Sandeep Singh departed after a 35-ball five, including a four.

Amit Mishra (17) and Jayant Yadav (17) provided brief company to Rahul before falling to Stuart Meaker, who is in the team as cover for the injured Steven Finn.

The regular fall of wickets, however, did little to affect Rahul’s morale as he held one end.