England Women stormed into the final of the Women’s ICC World T20 2014 by beating South Africa Women by nine wickets in the semi-final at the Sher-E-Bangla National Stadium, Mirpur. It was a comprehensive performance by England, who are considered one of the favourites of the tournament. The England bowlers first put on a splendid show to dent South Africa and then their batswomen helped them sail through. They will meat Australia Women in the final. Australia beat West Indies in the first semi-final by eight runs.

Anya Shrubsole started things off for England as she bowled Lizelle Lee in the very first over. From there on, South Africa struggled to fight the accurate England bowling. Mignon du Preez scored 23 in the middle order, but had to play a largely attritional innings. Chloe Tyron was the top scorer for South Africa with 40 and it was only due to her innings that South Africa went past 100.

Rebecca Grundy took two for 22 for England and Shrubsole recorded two for 12. Danielle Hazell was fantastic as she recorded figures of eight runs for no wicket in her four overs. South Africa could only muster 101.

In reply, Charlotte Edwards and Sarah Taylor took charge of proceedings. They were rotating strike and smashing boundaries to keep England on course. With the partnership on 67, Edwards was caught and bowled by Sune Luzz for 36 in the 12th over. But, it was too little too late as Heather Knight came out and saw it through for England with Taylor. England won with 19 deliveries to spare. 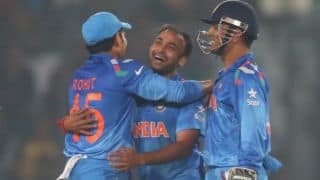