Hello and welcome to CricketCountry's coverage of the most-awaited blockbuster series of the season, the Ashes 2013. After months of one-sided predictions we are finally here to witness the series. Are Australia as bad and inexperienced as they have been portrayed as? Can England really pull off a cleansweep? All these questions will be answered over the course of the next six weeks, which started yesterday. So join in and please remember to refresh every now and then. 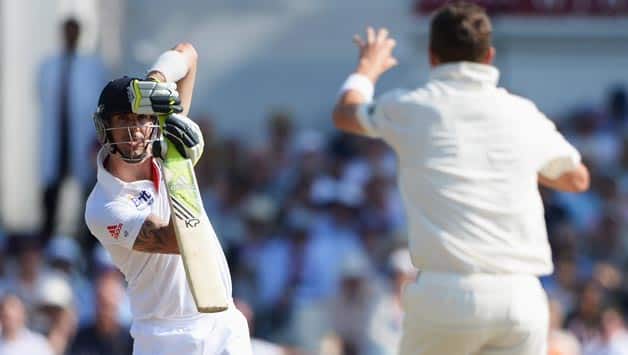 After meandering along at a run-rate of 1.30, England have reached stumps on Day Two at 80 for two, with a lead of 15 runs. More importantly, skipper Alastair Cook and Kevin Pietersen are unbeaten going into Day Three, which should decide the fate of this Test match. Join us again tomorrow for more action.

Pietersen brings up the 50-partnership with a glorious cover drive for four, before Alastair Cook did exactly the same to take England in the lead.

Meanwhile, not very far away…

Ashton Agar’s father, John, speaking to BBC’s Test Match Special says that his son “handles pressure very well. He can bat well. He’s very capable of getting good runs.” Stating the obvious, John, but congratulations! His mother, Sonia, says, “When he hit that shot, I thought it was going for a four. But we are very proud. He is very level-headed. He is a very calm young man.”

Mommy confirms one more thing: “He’s not a No 11.” Are you listening, Michael Clarke?

Ashton Agar, the hero, comes on for a bowl. Kevin Pietersen must be dreading it. England continue to tread along cautiously. There is plenty of time left in this game and there is no need for any heroics at this stage.

Oh dear, it appears there was some issue with Hotspot during Trott’s dismissal. That’s twice England have been undone by the umpire — human and robotic.

Mitchell Starc takes two in an over! First, the left-arm pacer drifts down leg and Joe Root tries to whip it down to fine-leg, but finds the edge that is taken by Brad Haddin behind the sticks. Then, he strikes Jonathan Trott plumb in front, but umpire Dharmasena thinks it took the inside edge. Australia decide to go for the review and Hotspot reveals there was no edge.

England have got off to a cautious start in their second innings, not wanting to lose any wickets before tea. Meanwhile, across the Pacific, Sri Lanka are on 49 for two in 14 overs against India in the final of the tri-series.

Oh no, he’s out! Ashton Agar has pulled Stuart Broad has pulled Stuart Broad straight to Graeme Swann at deep mid-wicket, two runs short of what would have been a magical and record-breaking century on debut by a No 11. Nevertheless, he has helped Australia take a lead of 65 runs, something which seemed lightyears away when he came in at 117 for nine.

Ashton Agar has now registered the highest score ever by a number 11 batsman, going past Tino Best’s 95 #ashes #EngvsAus

Broad can grow all the facial hair he wants, he’ll still look like a male Emma Watson.

So, that’s lunch then. This last-wicket partnership for Australia is now worth 112 runs. Ashton Agar looks unstoppable, and Phil Hughes is just enjoying himslef on the sidelines. How far can Australia go? Join us in a bit for the second session.

Morning twitter just woke up and saw my record is in deep trouble #ashes well played AGAR #11 ….go on lad get a big one .@BumbleCricket

Ash just past @glennmcgrath11 61 as highest score by aussie no 11 ever! Scores are level!!! #Agar #Ashes

Ashton Agar brings the scores level with a couple of glorious boundaries. The first was a mighty pull as Graeme Swann gifts him a short delivery. Then, Agar brings it right out of the textbook as he late-cuts the off-spinner for a boundary to the third-man fence. Take a bow, Sir!

Would you believe it?! Ashton Agar has a fifty on Test debut! And he has outscored Phil Hughes as well. It’s been an absolutely splendid display of batsmanship, especially for a No 11. He won’t be batting at that position for long, it would seem. Meanwhile, Australia have brought up their 200 — something that seemed a distant dream just an hour ago.

My word. Gowery drive through the covers from Agar brings up the fifty partnership. #ashes


Ashton Agar, on Test debut, has already broken a record!

Ashton Agar is playing a handy little innings here. Steven Finn is obliging the Australian last-wicket pair with a consistent spell of short-pitched bowling that isn’t helping England’s cause in any way. Imagine the drama if these two manage to wipe out Australia’s deficit! The 150 is up already.

This last wicket stand is starting to move from “irritating” to “Nick Knight”. #ashes

Didn’t see much of Fred Trueman … But if he was better than @JimmyAnderson9 he must have been a bloody genius…. #Ashes

Graeme Swann picks his second wicket, that of James Pattinson, as Australia inch closer to being bowled out with their deficit just under three figures.

And there it is! No 5 for Jimmy Anderson. And yet again, it’s caught by Prior. Mitchell Starc is the one who finds the edge this time and Anderson’s love affair with Trent Bridge continues.

Anderson has another! Just a hint of reverse swing there but it’s enough to find Peter Siddle’s edge. Matt Prior takes a brilliant catch diving to his right. Swann, then, spills a low chance at second slip to deny Anderson his fifth.

And that’s number six for England. Graeme Swann has zipped through the defences of Brad Haddin with an absolute ripper! The rev-meter shows more than 2,300 rpm! Haddin had no idea!

And back comes Broad…

Steven Smith has reached his fifty with a glorious cover drive off Graeme Swann. It’s his fourth half-century and second against Australia. His timing has been immaculate! And, oh, I spoke to soon! He’s out! Goes for another drive past mid-off but can only nick it to the wicketkeeper. Anderson has his third wicket.

Broad has just left the field…

Australia are off to a positive start. Steven Smith has picked on from where he left off yesterday — extremely confident he’s looking in the middle. England have started with James Anderson and Steven Finn. Stuart Broad is also on the field and should bowl soon.

It looks like a bright, sunny day here, at least on the telly. Should be a great strip for batting.

Potential turning point in the career of Steve Smith. He has plenty of heart and plenty of fight, he’ll be a serious Test batsman. #Ashes

Hello and welcome to CricketCountry’s coverage of Day Two of the first Ashes Test played between, of course, England and Australia. After bowling out England for 215 thanks to a fifer from Peter Siddle, in reply, Australia were 75 for four. Steven Finn and James Anderson picked up two wickets each.

After months of one-sided predictions we are finally here to witness the series. Are Australia as bad and inexperienced as they have been portrayed as? Can England really pull off a cleansweep? All these questions will be answered over the course of the next six weeks, which started yesterday. So join in and please remember to refresh every now and then.

I’m Jaideep Vaidya and I will be bringing you updates of the first Test. Read the live blog of Day one here.
For a quick review of Day 1, tap here.