Only 49 overs were bowled on Day 1 of the Test series at Old Trafford, with Babar Azam scoring an unbeaten fifty.

Babar Azam scored a brilliant unbeaten half-century and Shan Masood was given two lives by Jos Buttler as Pakistan took advantage of a rain-marred Day 1 of the opening Test against England, at Old Trafford, Manchester.

Pakistan were 43/2 at one stage after Abid Ali and Azhar Ali, who had opted to bat, were dismissed by Jofra Archer and Chris Woakes respectively.

However, Babar (69) then revived Pakistan’s innings. He was supported by Masood, who hit an unbeaten 46 as the visitors reached 139/2 when play was abandoned due to bad light.

Buttler dropped Masood on 45 and the opener was still on the same score when the England wicketkeeper missed a stumping chance.

Earlier, Masood and Abid survived testing new-ball spells from James Anderson and Stuart Broad, but Archer struck with the first ball of his second over. Abid (16) was the man to depart as it brought an end to a 36-run opening stand. Azhar soon lost his wicket to Woakes, the Pakistan captain also wasting a review.

Babar and Masood then steadied the ship, with the latter being cautious and his partner playing with fluency.

Babar raced to his fifty off 70 deliveries.

An early tea was taken due to rain with Pakistan on 121/2. Only 7.5 overs could be bowled in the third and final session of the day that in itself kicked off after a rain delay of close to two-and-a-half hours. 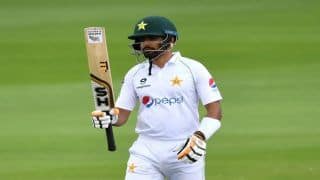 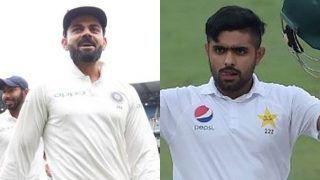 England vs Pakistan: If it Was Virat Kohli Everyone Would be Talking But Not so For Babar Azam: Nasser Hussain