England’s Zak Crawley scored his maiden Test century as he combined with Jos Buttler to punish Pakistan on Day 1 of the third and final Test, at The Rose Bowl, Southampton.

The 22-year-old Crawley, playing in his eighth Test, hit an unbeaten 171. He shared an unbroken 205-run stand with Jos Buttler, who made 87*.

After rain ruined the second Test at the same venue, England were struggling at 127/4 midway through Friday’s play.

However, Pakistan failed to get another breakthrough in the remaining overs, with Crawley and Buttler taking the hosts to 332/4 at stumps.

Crawley had arrived at the crease in the fifth over after opener Rory Burns (6) was removed by Shaheen Afridi.

Dom Sibley (22) and Crawley then added 61 for the second wicket but the former also departed before lunch, given out LBW to leg-spinner Yasir Shah.

Soon, Naseem Shah got the better of Joe Root (29), while Ollie Pope became Yasir’s second victim as the hosts found themselves in a spot of bother.

Just like his 75 helped England recover from 127/5 to secure a three-wicket win in Manchester, Buttler tilted the balance in his side’s favour.

The wicketkeeper-batsman will hope to reach three figures on Saturday, while his partner Crawley has a double ton in his sights.

“The run chase at Old Trafford was dramatic, but this has been England’s best day of the summer,” said Michael Vaughan, the former England captain.

“It was the manner of which the partnership developed from the get-go: just playing good Test cricket. And Zak Crawley, you just can’t see a better century.” 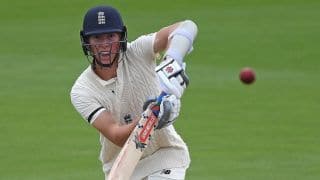 IPL 2020: Kolkata Knight Riders Captain Dinesh Karthik Promises to 'Give it All' Despite Various Obstacles