England have lost their way in the ICC Under-19 World Cup 2014 semi-final against Pakistan at the Dubai International Cricket Stadium. After losing Ryan Higgins, it is now left to skipper Will Rhodes to guide the innings in the slog overs. England are 149 for six in 44 overs with skipper Will Rhodes unbeaten on 44.

Karamat Ali bagged two wickets in two balls to push England on the backfoot. half-centurion Higgins tried to break the shackles and stepped down the track. He failed to read the turn of the delivery and is stumped. Joe Clarke who played a crucial 42 in the quarterfinals was done in by a googly and was bowled for a duck.

Pakistan hit back with crucial strikes and dented England quite a bit. As a result, they are now searching for that late surge, with skipper Rhodes in the seat. 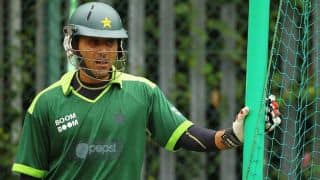