England vs Pakistan Under-19 World Cup semi-final: England fight back as match hangs in balance; score 140

England fought back with quick wickets after the partnership between Saud Shakeel and Ameer Hamza in the ICC Under-19 World Cup 2014 in Dubai. After an 84-run fifth wicket partnership, Rob Sayer struck by dismissing Hamza with a fuller delivery. New man Saifullah Khan to was caught behind for a duck. Pakistan are 140 for six in 36 overs. They need another 65 runs in 84 deliveries.

Sayer had earlier got skipper Sami Aslam with a fuller delivery. It was a similar dismissal for Hamza who scored 35 runs. Pakistan were down 57 for four when Shakeel and Hamza came together. They played in a mature manner content taking singles and twos. Leg-spinner Robert Jones kept his line tight and bowled for seven overs on the trot.

The second innings of the match has been a roller coaster ride, with Pakistan getting off to a good start and then losing wickets in succession. 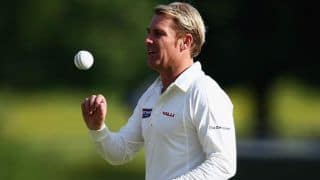