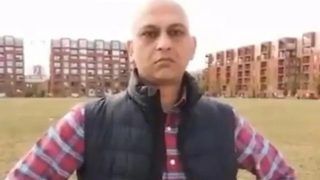 He starts by saying forget that pose, it has been a year now.

Remember this Pakistani fan - who became a star during the 2019 Cricket World Cup. From memes to trolls, his dejected reaction became the butt of all jokes. The Pakistan super fan, Sarim Akhtar, is back and he has a message for the national cricket team which takes on England in the first Test at Old Trafford, Manchester. He starts by saying forget that pose, it has been a year now. "The Pakistan team have come to England for a Test series! Wow, what an exciting time! Well a simple message for Pakistan, play with pride and passion. Last time we had drawn the series and this time we have to win. With a simple message, if the ball is outside off let it go," he says.

Play with pride and passion!

Unfortunately, the eagle-eyed netizens from India spotted him in the same attire from last year and what followed next was he got trolled.

Bhai jaan I hope you have several pairs of the clothes. All your fans will demand you wear the same clothes forever :)

He is in the same outfits. Does anyone else notice?