Ahead of the start of much-anticipated Test series against South Africa at home, Cook revealed the toughest bowlers he has ever faced.

Alastair Cook has been England’s finest Test batsman without a shred of doubt; not just for the sheer number of runs he has scored, but also for how quickly he has got those runs. At 32, he already has 140 Test caps and over 11,000 Test runs under his belt. No other England batsman has ever touched the 10,000-run mark. With age by his side, he is in great position to challenge the records set by Indian maestro Sachin Tendulkar. During his decade-long career so far, Cook has dominated the bowlers. However, like every other batsmen, he too has had his fair share of troubles against particular bowlers.

Ahead of the start of much-anticipated Test series against South Africa at home, Cook revealed the toughest bowlers he has ever faced. In a candid chat with The Times UK, Cook shared that former Australia seamer Stuart Clark, along with Pakistan pace pair of Mohammad Aamer and Mohammad Asif in 2010, are the bowlers he has struggled against during his prolific international career.

Cook opened up on the same in a rapid-fire interview. The former England captain, who has faced many of the modern-day great bowlers including the likes of Glenn McGrath, Shane Warne, Mitchell Johnson, Dale Steyn and Muttiah Muralitharan among others, said that he has struggled the most against the three pacers.

Interestingly, Cook and Clark have met in seven Tests in two Ashes series in 2006-07 and 2009. In 14 innings, Clark dismissed the southpaw five times, with the batsman passing 50 only once (116 in Perth, December 2006) in their seven meetings.

Against Aamer and Asif, Cook struggled in the four-Test series in England in 2010. In the seven innings that he played, Cook was dismissed by the Pakistani pace duo on six occasions, with both Aamer and Asif dismissing him three times each.

England and South Africa will open the four-Test series with the first Test starting at Lord’s commencing on Thursday, July 6. This will be Cook’s first Test as non-captain in many years, and his successor Joe Root’s first as England captain. 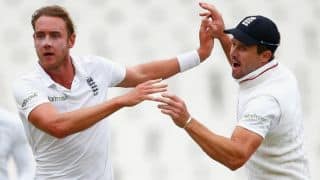 England vs South Africa: Dean Elgar confident of no ‘scarring’ of show against Stuart Broad