England resume their innings at 267 for eight on the fifth and the final day of the first Test.

I love how those that are critical of Kumar Sangakkara mention him scoring runs against bad sides as if that makes him worse.

Sri Lanka 99/1, overs 29
K Silva 44(77), K Sangakkara 34(73)
It is Stuart Broad perhaps bowling the last over of the session. Silva gets one to the boundary boards. Are Sri Lanka looking to win this one????? It would be a herculean task to do that. They end the first session of the final day on 99 for the loss of one wicket.
Sri Lanka 95/1, overs 28
K Silva 40(71), K Sangakkara 34(73)
England have tended to bowl wayward stuff in the first session. Plunkett isn’t getting his line right for sure. On the other hand, Mahela Jayawardene, Kumar Sangakkara and Shivnarine Chanderpaul seem to be battling it out to see who can aggregate more Test runs. Sangakkara has just gone past Chanderpaul now. Moeen gets one to turn and it falls short off Ian Bell. Sangakkara survives.
Sri Lanka 84/1, overs 23
K Silva 33(60), K Sangakkara 30(54)
Moeen Ali with his off-spin was introduced into the attack. Sangakkara and Silva though look like can take Sri Lanka to lunch session just one down. England need some magic from someone here. A toe crushing yorker or a snorter of bouncer? Sangakkara just playing with utmost ease on the backfoot.
Sri Lanka 77/1, overs 19
K Silva 32(50), K Sangakkara 24(40)
Plunkett too started his spell from around the wicket to Kumar Sangakkara. He has a short leg in place as well, as England look to bowl more bouncers. However, the deck is flat and when Plunkett banged one into the pitch, Sangakkara was able to pull him with ease. A fifty run partnership between the two as well.
Sri Lanka 64/1, overs 16
K Silva 28(42), K Sangakkara 16(31)
Anderson continued to bowl from around the wicket and good lines. But Sangakkara is showing stoic defence outside his off-stump.Sri Lanka need more of such stoic defence to save the match on the final day’s play. Plunkett has come into bowl as second change.
Sri Lanka 46/1, overs 13
K Silva 15(33), K Sangakkara 10(21)
England continued to bomb Sri Lankan bowlers with short deliveries. It can perhaps be used as a surprise weapon more than banging almost everything into the track. The ball will lose its shine and it has to be said that James Anderson is a swing bowler. Anderson then went around the wicket to create a different angle to Sangakkara the batsman.
Sri Lanka 26/1 I Overs 8
K Silva 5(22), K Sangakkara 1(1)
It was Broad who finally took the wicket of the left-hander, Karunaratne. He tried to flick only to be caught by the short leg fielder Sam Robson. A big wicket for England to start with and yes the short ball tactic has worked for them. Sangakkara the lynchpin of Sri Lankan batting has come into bat.
D Karunaratne c S Robson b S Broad 16(24)
Sri Lanka 25/0 I Overs 6
D Karunaratne 16(22), K Silva 5(13)
Sri Lanka started the fifth day’s play looking to save the match. Sri Lanka are 21 for no loss after 6 overs. Sri Lanka have negotiated the first six overs of the match rather well. Both openers have left the ball well and that is something which is important when you play in England.

Hello and warm welcome to CricktCountry’s live blog of the fifth day’s play of England versus Sri Lanka first Test match at Lord’s. This is Bharath Ramaraj and I will do the live updates for the day’s play.

According to AFP, Gary Ballance‘s maiden Test century saw England carry out the “instructions” of discarded batting great Kevin Pietersen almost to the letter in the first Test against Sri Lanka at Lord’s. Zimbabwe-born Ballance, promoted to number three in only his second Test, made 104 after England had slumped to 121 for six in their second innings.

But by stumps the 24-year-old Yorkshire left-hander had guided England to a total of 267 for eight and a lead of 389. That left Sri Lanka needing to surpass the highest fourth innings total to win a Test at Lord’s — 344 for one, requiring 342, by the West Indies against England in 1984 — if they were to go 1-0 up in this two-match series. 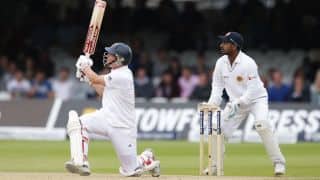 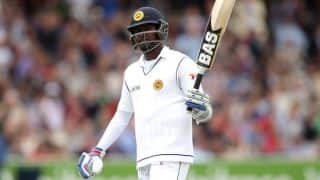