Sri Lanka wicketkeeper Prasanna Jayawardene said he expected England to “come hard” during this month’s two-Test series. The tourists took a five-match one-day series 3-2 with a six-wicket win at Edgbaston on Tuesday — a result overshadowed by the controversy surrounding the run out backing up or ‘Mankading’ of England’s Jos Buttler.

“After the one-day series loss, they will be coming hard, we know about that, we expect that and we are ready for that,” said Jayawardene, a Test specialist gloveman, after the third day of Sri Lanka’s four-day tour match against Northamptonshire at Northampton on Saturday was washed out without a ball bowled.

This tour sees Sri Lanka facing England in two Tests, with the first at Lord’s next week before the teams meet again at Yorkshire’s Headingley headquarters in Leeds. Sri Lanka have won Tests in England, in 1998 and 2006, but never a series involving more than one match.

During their last Test series in England three years ago, they lost a three-match campaign 1-0 with two draws after a dramatic collapse in Cardiff saw Sri Lanka skittled out for 82. However, the first innings of that match saw Prasanna Jayawardene, Sri Lanka’s wicketkeeper in Tests after batting great Kumar Sangakkara gave up the gloves in the five-day game, top-score with 112 in a total of 400.

“I think we have a good chance this time because we had a good one-day series and the morale of the boys is very high. It is not easy, not like the sub-continent. We have to adapt to the conditions and we have to adjust our technique also, both when batting and bowling.”

The Northamptonshire match has effectively been a trial game for the Sri Lanka seamers selected in the absence of Suranga Lakmal, out of contention for Lord’s because of a hamstring injury. During Friday’s second day it was Nuwan Pradeep who made the best case of any of Sri Lanka’s pacemen.

His lively spell of one for 30 in eight overs featured movement off a good length and excellent ‘carry’ on a placid pitch. Jayawardene, best placed of anyone to assess the merits of the bowlers in his position behind the stumps, believes that, unlike previous tours, Sri Lanka have an attack capable of thriving in English conditions.

“Lakmal’s a huge loss but everyone saw yesterday (Friday) that our pace bowlers did brilliantly on this track. I think we have a good pace attack too, so I think we can do much better in this series,” added Jayawardene of a contest that will pit Sri Lanka against an England team much-changed from the side that suffered a 5-0 Ashes thrashing in Australia.

Jayawardene was in good touch while making 25 on Friday and kept neatly too. Northamptonshire are currently 146 for five in reply to Sri Lanka’s mammoth first innings 558 for eight, a deficit of 412. They need 263 more runs to avoid the follow-on but Jayawardene indicated Sri Lanka would bat again if they got through Northamptonshire’s tail.

“I heard tomorrow (Sunday) it’s a good (weather) day,” said Jayawardene. “First we have to get them out, get five wickets and then bat again.” 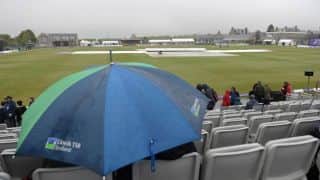 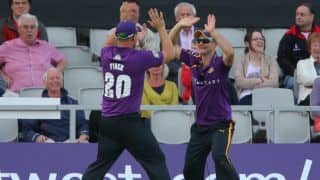