Sri Lanka will hope to carry their batting form from the Ireland series into ODI series against England starting on Tuesday.

After getting completly dominated in the Test series against hosts’ England, Sri Lanka will look to come back with much spite in the upcoming limited -overs contest. Sri Lanka  whitewashed Ireland in the two-match One-Day International (ODI) series at Dublin. Angelo Mathews and his men routed Ireland in both the occasions winning comprehensively and giving their low-on confidence batsmen much needed time in the middle. England will be hoping to carry their Test momentum into the ODI series under a change of guard with Eoin Morgan coming in to captain the side. England in the limited overs have been a kind of revelation since the past year or so. England in their last ODI series against South Africa narrowly lost out the series 2-3.  FULL CRICKET SCORECARD: England vs Sri Lanka, 1st ODI match at Nottingham

England who reached the finals of ICC World Twenty20 (T20) 2016 under Morgan will want to play with the same exuberance and might in this series as well, apart from the final 15-20 minutes of the match against West Indies where Ben Stokes was cantered for 24 runs to end up on the losing side. Jason Roy and Alex Hales were one of the most influential players for England at the WT20. Hales was in the Test series plundered 292 runs. Joe Root who has a poor series in the longer format of the game, will want to get back to his run scoring form. Much will depend on captain Morgan’s form who can propel a decent score to a match winning knock. Jonny Bairstow hammered and tonged in the Test against Lankan bowler’s stockpiling 387 runs in 3 Tests.

Sri Lanka on the other hand will want their batsmen to come good in the 50-over format. Against Ireland their batsmen batted accommodatingly  to register mammoth scores in both the ODIs. Kusal Perera accumulated 167 runs in 2 matches with a high score of 135 who was well complimented by Dinesh Chandimal who made good use of series. Chandimal who scored 172 runs for SL in the Tests will look to continue his scoring form in the ODIs. SL will want Mathews to come good who can be a difference between winning and losing. Kusal Mendis who was one of the more consistent batsmen during the Test will want to support the top order well again. READ: Angelo Mathews: Sri Lanka must be at best to beat England in ODI series

England will miss their best bowlers from Test James Anderson and Stuart Broad. However, they will depend on Chris Woakes and Steven Finn in their absence. Woakes and Finn in all picked up 15 combined and together will be eager to get the Dukes ball at their disposal. Moeen Ali, Liam Plunkett and Chris Jordan will hope to bring in their experience into a play. Spinning duties will in all likelihood fall on Adil Rashid and Ali. Rashid has been good in the 25-odd ODIs he has played.

Sri Lanka will hope for Nuwan Pradeep and Suranga Lakmal to continue their good form. With Dasun Shanaka in prime form, picking 6 wickets in the series against Ireland visitors bowling attack is looking much improved now. Pradeep was able to keep the English batsmen in check during the Test series picking up 11 victims. There was also some bad news for Sri Lanka as their key fast bowler Shaminda Eranga is ruled out of the ODI series owning to his hospitalization due to heart ailment. Farveez Maharoof who is making a comeback into the national side will have an added responsibility on his shoulders. 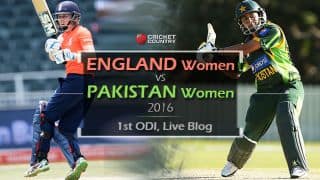