Kaushal Silva said it is time for the young Sri Lankan players to take up the responsibility of filling the void left by Kumar Sangakkara and Mahela Jayawardene.

Leeds: Kaushal Silva has urged Sri Lanka to fill the void left by Mahela Jayawardene and Kumar Sangakkara when they return to the scene of one their greatest triumphs for the first Test against England at Headingley on Thursday. Two years ago, Yorkshire’s headquarters ground was the stage where Sri Lanka clinched a dramatic victory off the penultimate ball to secure their first Test series win in England. But their first tour of England since that campaign sees them without Sangakkara and Jayawardene, both now retired from international duty. Live Cricket Scorecard: England vs Sri Lanka 2016, 1st Test at Headingley

“We did well here,” said Silva, an opening batsman who played in that victorious 2014 team, at Headingley on Tuesday. “We were thrilled with that, but this is a new series. Sanga and Mahela have left now. So it’s time for all these youngsters to take their responsibility and do their jobs. We need to make sure we put up at least 300… to put ourselves in the game.” READ: Dhammika Prasad ruled out of 1st Test

Sri Lanka will also be without injured paceman Dhammika Prasad, whose five second-innings wickets played a key role in the tourists’ 2014 victory at Headingley. “He is one of the key bowlers, and obviously we’ll miss him,” said Silva ahead of the three-Test series. “But we have other very talented bowlers,” he added of an attack that also includes Suranga Lakmal and Nuwan Pradeep, as well as the decidedly sharp Dushmantha Chameera. Sri Lanka will again be captained by Angelo Mathews, with the all-rounder’s excellent hundred paving the way for their success at Headingley two years ago.

The once feared pitch at Headingley, in Leeds, northern England, is now generally a good surface to bat on, albeit one with pace and bounce, and overhead conditions largely determine how much assistance a seam attack will receive. Yorkshire coach Jason Gillespie said it was important bowlers avoided a “pretty length.” READ: England looking for revenge against Sri Lanka, declares Stuart Broad

“Sometimes if fast bowlers see the ball whizzing through to the keeper at chest height a bit of ego then comes into play,” the former Australia quick told the Sunday Times. “It is that ‘pretty length’. It looks good but is it actually challenging the batsmen and putting him under pressure?”

England have a poor recent record at Headingley, with just one win and four defeats at the northern venue since 2007. In their first Test campaign since a series win in South Africa, England will have to decide whether to give a debut to Nottinghamshire’s Jake Ball, who has made an impressive start to the county season, or retain Steven Finn as the third seamer behind James Anderson and Stuart Broad — now the world’s No. 1 ranked Test bowler. READ: Jake Ball says Trevor Bayliss had no idea who he was

“There is a bit of revenge to be had,” said Broad, reflecting on a 2014 series which saw Cook, severely criticised for tactical naivety, contemplate resigning the England captaincy after the Headingley defeat by Sri Lanka. “It was quite an emotional series, it really hurt us as a team to lose in our own conditions.”

Thursday’s match is set to break fresh ground by being the first in men’s cricket where a new points system, modelled on the one used by England and Australia for the women’s Ashes, will be employed. In a bid to provide further “context,” the results of all the international fixtures this season between England and Sri Lanka will be put together to produce an overall winner. Details on how points will be allocated between Tests, one-day internationals and Twenty20s are expected to be announced later on Wednesday. 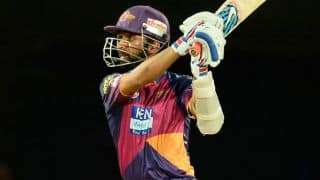