The players have come out after lunch. The rains have cleared out. We will now have Sri Lanka pushing for the victory.

Early lunch has been taken at Headingley. The reports coming in are that it is raining.

England 83/5 | Overs 44
Root 9(58), Ali 22(65)
There is rain here at Headingley and the players are going off now. England have held on today and would hope this shower persists.
England 82/5 | Overs 42
Root 9(58), Ali 21(53)
Root has come to a standstill. He hasn’t scored runs in a while and now only Ali has got some onto the total. Shaminda Eranga continues from one end and Rangana Herath is at the other. Not much happening as there is a lot of defending and leaving. In the last four overs, only four runs have been scored, all by Ali. Root is content in blocking it.
England 78/5 | Overs 38
Root 9(51), Ali 17(37)
A very slow passage of play for England as they score only two runs in the last four overs. Root has now played 50 balls and has scored only nine runs. England may look at this period as one of settling in, but they also shouldn’t let the run-scoring momentum go away. Now, Sri Lanka have taken off Dhammika Prasad and got back Shaminda Eranga.
England 75/5 | Overs 34
Root 9(40), Ali 15(22)
Moeen Ali gradually gets into the groove. He tries to attack Herath, but isn’t able to get too much into it. He then maintains discipline against Prasad, who continues to test him outside the off-stump. Ali is leaving a few and when it is a bit overpitched, he is driving them with ease. Later, Prasad overpitches again and Ali drives it gracefully down the ground for a four.
England 59/5 | Overs 30
Root 7(27), Ali 1(11)
The day begins with Dhammika Prasad and Rangana Herath continuing. Prasad has Moeen Ali on the crease for a while as he plays and misses deliveries outside the off-stump. Ultimately, he does manage to get off the mark off his 11th delivery with one that was on the stumps. Root is trying to play solidly and has been defensive against Herath so far.

Welcome to CricketCountry’s coverage of Day Five of the second Test between England and Sri Lanka at Headingley, Leeds. England is facing their first home series defeat to Sri Lanka after a dismal day four’s play during the second Test at the Headingley, Leeds. Chasing 350 to win, the hosts’ top-order was destroyed by fast bowler Dhammika Prasad’s four for 15 as they slipped to 57 for the loss of five wickets in their second innings. A lot will depend on Moeen Ali, Joe Root and Matt Prior, as the trio have to score big to help England save themselves from defeat. I am Nishad Pai Vaidya and will take you through the day in what promises to be a thriller between the two teams at Headingley. 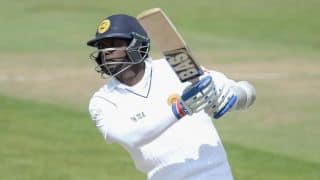