England vs West Indies 2017, one-off T20I at Chester-le-Street, Preview and Likely XI: Visitors aim for re

The reigning World T20 champions get set to face off against the former champions England in the one-off T20 International at the Riverside Ground in Chester-le-Street on Saturday.

Following a 1-2 defeat to hosts England, visitors West Indies have nothing more to gain other than redemption. Therefore, the reigning World T20 champions get set to face off against the former champions England in the one-off T20 International at the Riverside Ground in Chester-le-Street on Saturday. The visitors did show some resilience in the Tests, but were not strong enough to challenge the heroes of England at home in the format. Therefore, this format clearly sets the way towards the redemption for the visitors. However, with the game being in England s backyard, the visitors still can take anything for granted.

The last time these two teams faced each other in the format was back in 2016 during the ICC World T20 final, where it was Carlos Brathwaite, who struck four consecutive sixes in the final over off Ben Stokes to steer West Indies to glory. Therefore, it is not just West Indies, but England too, who would be up for redemption.

Considering England s previous outing in the shortest format of the game, it came against the visiting South Africans in June 2017, where they beat them 2-1, sending a clear message to world cricket that when it comes to home, they are tough to beat. As for the West Indies, their last T20I series was against India in a one-off T20I at Kingston, which was won by the hosts comfortably and proving that why they are the reigning World T20 champions. As for both the teams colliding in the format, it came back in 2013-14, when West Indies beat them 2-1 in a three-match series at home. Therefore, as of now, both the teams have proved to be the king at home, which puts England on advantage in this tie.

As for England, the side is all set to be gain led by Eoin Morgan. As for the openers, Jason Roy and Alex Hales are the front runners, followed by the skipper himself. However, the captain could decide among either of Roy or Dawid Malan, owing to Roy s shaky form of late. The middle order should begin with Jonny Bairstow, followed by the likes of Joe Root, Jos Buttler and Chris Jordan. As far as the lower order is concerned, Adil Rashid marks the start, along with Liam Dawson, while the fast bowlers could well be David Willey and Liam Plunkett. However, Tom Curran and Jake Ball too are strong contenders for fast-bowling.

As for the West Indies, skipper Brathwaite will take charge. Chris Gayle and Evin Lewis are all set to open, followed by Marlon Samuels at No.3. The middle-order has the firepower ofKieron Pollard, followed by Brathwaite, along with Chadwick Walton and Jason Mohammed or Rovman Powell. As for the bowling, Sunil Narine starts as specialist spinner, along with Ashley Nurse as extra spinner. Among the fast bowlers, Jerome Taylor and either of Ronsford Beaton or Kesrick Williams makes in. However, if Nurse is opted out, all the three pacers go in.

As for the track, it is expected to be on the slower side. This would also be the first night game at this venue after floodlights were installed at the ground in 2015. The venue has hosted three T20Is till date, with the last game being in 2013, involving England and Australia, which was won by the hosts comfortably by 27 runs. Among the three games England have managed to win one and lose one, while the other game was washed out. Therefore, I must say the odds are in favour of the hosts. 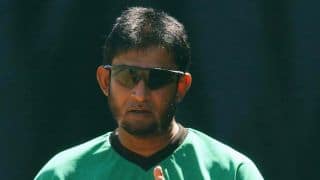