England, who are eyeing to level the series in Manchester, were put to bat by visiting skipper Jason Holder after he won the toss.

England openers Rory Burns and Dominic Sibley got off to a cautious start but Roston Chase provided West Indies with a crucial breakthrough at the stroke of lunch. With rain playing spoilsport, the first session saw only one hour of play on the opening day of the second Test of series at Old Trafford, Manchester on Thursday.

England, who are eyeing to level the series in Manchester, were put to bat by visiting skipper Jason Holder after he won the toss, which was delayed by more than an hour because of rain.

The run-up to the Test was marred by controversy surrounding fast-bowler Jofra Archer, who was ousted from the team for breaking the bio-secure protocol. But England openers put the distraction behind them and put up a cautious performance in the first session of the day.

Things went well for the hosts till the last over of the session as on the second ball of the 14th over, Chase trapped Burns in front of the wicket and he was adjudged LBW for 15. He went for the review but three reds meant he had to head back into the hut. With that, Lunch was taken by the umpires.

No team has ever won a Test at Old Trafford having chosen to bowl first ? #ENGvWI pic.twitter.com/DqoH3FD60K

Holder will be the happier man going into the break as his decision to hand Chase the last over before the break resulted in a crucial breakthrough. In total, five bowlers were used by visitors during the short session. 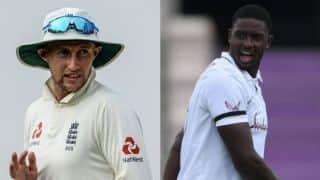