Broad boosted England to 369 before the hosts' seam attack caused problems for the visiting batsmen to leave the Windies 137/6 at stumps on day two.

England’s experienced fast bowler Stuart Broad nullified all the hard work done by West Indies seamers as he first lifted the home side to a strong total of 369 with his cracking half-century before picking up two crucial scalps on day 2 of the third and final Test at Old Trafford, Manchester. Early wickets gave West Indies strong hopes of bowling England out for under 300, but a blistering 62 from Broad boosted them to 369. Carrying on the momentum, England seam attack caused problems for the visiting team to leave Windies 137/6 at stumps.

After bowling the hosts out for 369, the Windies kept losing wickets at regular intervals as the trio of Broad, Anderson and Archer — playing together for the first time in this series — kept asking questions with their probing line and pace.

Kraigg Brathwaite was the first to go as he nicked a Broad off-stump channel delivery to Joe Root at slips. John Campbell made a meal of Archer’s bouncer for Rory Burns to take an easy catch at gully while Shai Hope, looking to get back among runs in Tests, had no answer to a perfect Anderson middle-and-off line delivery which kissed the bat and flew to wicketkeeper Jos Buttler.

At the break, Shamarh Brooks (4 batting) and Roston Chase (0 batting) were at the crease.

Earlier, Broad poured cold water on Shannon Gabriel and Kemar Roach’s good work with the ball with a quickfire half century as England were bowled out for 369 at Lunch.

In between the two dismissals, Chris Woakes chopped a Roach delivery onto his stumps as the West Indies pace spearhead celebrated his 200th Test wicket. Roach finished with best figures of 4/72.

Archer was taken by Holder off Roach at second slip as England were suddenly reduced to 280/8 before veteran Broad swung the willow from ball one to bring up his 50 off 33 balls and finally got out for 62 from just 45 balls (9×4, 1×6) to turn the tide in the hosts’ favour. 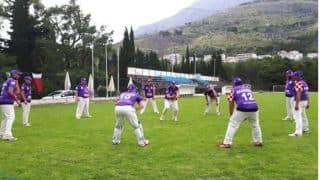