England and West Indies will take on each other in the fourth warm-up match of the ICC Cricket World Cup 2015. England have a new captain in Eoin Morgan and his troop had put in a commendable performance in the recently concluded series, which featured Australia and India. Although England lost in the final, they can take solace from the fact that they did a commendable job. They still have the experience to perform well in the World Cup and they have the chance to prove their worth and get their combinations right in the first warm-up match against West Indies at Sydney. ICC Cricket World Cup 2015: SCHEDULE & MATCH DETAILS

West Indies on the other hand are coming at the back of a crushing series defeat at the hands of South Africa. They will be low on confidence at the moment and will want to make full use of these warm-up matches. Their new captain Jason Holder has not had enough time to stamp his authority on the team. He still has the experience of former skipper Darren Sammy, Marlon Samuels and hard-hitting Chris Gayle at his disposal, who can be extremely lethal on their day. West Indies certainly do not lack experience but they have to gel well as a team. If they do that, they can go a long way in the World Cup. West Indies like England will also want to get their combinations right and these warm-up matches are a good way to test the regular playing 11 and also the bench strength. ICC Cricket World Cup 2015: POINTS TABLE 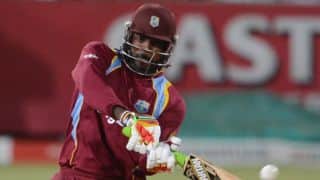