England opener Joe Denly had a tough initiation into Test cricket after gathering scores of six and 17 from his first two innings.

England opener Joe Denly had a tough initiation into Test cricket after gathering scores of six and 17 from his first two innings as the tourists were blown away inside three days by West Indies for a series defeat in Antigua.

The result, though, could have gone worse had the rub of green not gone in his favour. In his debut innings, he survived a close shout for lbw and then was dropped in the second dig. On both occasions, he was yet to open his account.

The third Test, which gets underway from Saturday, offers the Kent batsman a final chance to potentially seal his place for the home Ashes series that follows the ICC World Cup. And proving the England management that he’s more than just a stopgap arrangement at the top is at the top of his agenda.

“Playing in an Ashes series is an absolute dream and I’d be lying if I said I wasn’t thinking about it a little bit,” Denly was quoted as saying by Sky Sports on Wednesday. “Obviously with the opportunity I have in the next Test it is there, but it is important to try and not think about it as much as possible. I need to have a real focus on trying to get a score in this next Test and prove to those guys who think I am a stopgap, makeshift opener that I have got a future as an opener in Test cricket.”

Denly replaced a struggling Keaton Jennings at the top but fell after two poor shots that included chasing a wide delivery from Alzarri Joseph and then being bowled in the second innings while offering no shot.

“That’s the only disappointing thing looking back on my debut – (getting out to) a rank long hop and then not playing a shot – pretty frustrating. I spoke to (former Kent team-mate) Rob Key a few days ago and he said he doesn’t remember anything about his first Test innings, but I remember quite a lot,” Denly said. I’ve looked up at Brendon McCullum throughout my childhood: Tim Seifert 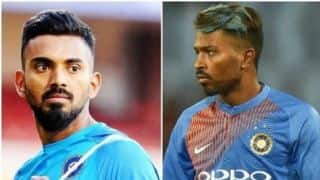