West Indies coach Stuart Law criticised Nasser Hussain after the former English batsman was made to digest a “humble pie” after his remark on West Indies cricket. Following the shameful defeat in the first Test at Edgbaston, West Indies turned things around and notched up a remarkable win at Headingley. While Curtly Ambrose had called the Edgbaston “embarassing”, Hussain wrote in his column that West Indies had begun to falter in the second Test due to the increased demands of Test cricket compared to T20. ALSO READ: Shai Hope can become West Indies modern-day great, says Stuart Law

Law had said, “Nasser is entitled to his opinion, people make assumptions all the time. But he doesn t know the group of players, he doesn t even know me. He doesn t know the characters that are inside that dressing room I see it day in, day out. We probably didn t make the greatest decisions on the field but never once did I believe that T20 mindset was a factor. I think it was great that we sent a big humble pie for Nas to go and chomp on in the commentary box.”

Hussain reacted positively to Law’s criticism in his latest column. The former England skipper wrote, “It looks as if West Indies coach Stuart Law is doing what I did when I was a player and using external opinions to motivate his side. Good on him. I wrote a Sportsmail column after the fourth day at Headingley, when the West Indies discipline had started to slip a bit after three excellent days. My point was that to win a Test match or a series you have to keep your standards up for five days and for more than one game.”

Praising the match-winning duo of Kraigg Brathwaite and Shai Hope, Hussain mentioned the same advice applies to England as well.

“The same basic advice applies to England too. It is why they have so often failed to back up victory with another. I made no comment on how I thought West Indies might fare on the final day, and I take my hat off to Kraigg Brathwaite and Shai Hope. You can react in one of two ways to criticism ignore it, or use it to motivate your side. I used to do that myself, so it would be two-faced of me to turn around and say Law should not have reacted. He did the same with a piece Curtly Ambrose wrote in this newspaper after West Indies lost at Edgbaston and, in fairness, he got the response he wanted,” Hussain further wrote.

Hussain praised Law and elaborated on the importance of discipline and consistency, which he believes England lacks at the moment.

“I admire the way Law stood up for his players after they lost 19 wickets in a day. He could have had a pop, but he stuck by them. But he must realise, deep down, that if his side are going to move forward in Test cricket, they can t have the wild swings they ve had over the last few games. They need to keep their discipline over longer periods. Like West Indies, England have to get rid of the inconsistency that keeps holding them back,” wrote Hussain. 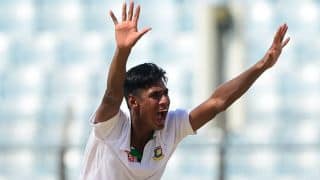