Legendary all-rounder Ian Botham has hailed England's ruthless 4-0 Test series thrashing of India and had predicted that Andrew Strauss' men can remain as the world's numero uno team for at least five years. Legendary all-rounder Ian Botham has hailed England’s ruthless 4-0 Test series thrashing of India and had predicted that Andrew Strauss’ men can remain as the world’s numero uno team for at least five years.

Botham said a few key players like captain Strauss and his predecessor Kevin Pietersen may hang up their boots in the coming three-four years but the core of the current crop will stay longer and they can dominate the world.

“I can’t see them getting moved for at least five or six years, maybe eight. I think for five or six years they’ll stay pretty much as they are now. Two players – the captain and Pietersen – might be the two that in four or five years’ time might fade out,” Botham said.

“But they’re already making plans for that. The rest of the side will go on and on with the back-up that they’ve got and a manager/coach that will keep their feet on the ground,” he told Sky Sports.

With four players in the top 10 of both the ICC batting and bowling rankings, Botham said the strength and depth in the team is there for all to see.

“They are the best in the world. In batting, four of the England players are in the top 10 now. You’ve got Bell and Cook equal third, you’ve got Trott at six and you’ve got Pietersen at eight.

“In the bowling department in the top 11 we have five; Anderson second, Swann third, Broad fifth, Tremlett 10th and Bresnan’s shot up to 11th. That’s why they’re the best side in the world,” said the former England captain.

Botham hailed coach Andy Flower’s work and urged the England and Wales Cricket Board (ECB) not to let him leave the team.

“Please don’t let him go anywhere else. We need him. He is the man that steers the whole ship. The captain does his bit, but as a partnership they’re excellent,” he said.

“They (the ECB) will look after him and are obliged to look after him. There is a lot of international cricket and we always forget that the coach is there all the time. He doesn’t miss the one-dayers and just play in the Tests; he is there for every single game.

“So I’m all for giving him a break and he deserves it.

With the back-room team he’s got, for five one-dayers in India or wherever it is, this team will operate. This ship isn’t going to go rudderless. They’ll be fine,” Botham added. (PTI) 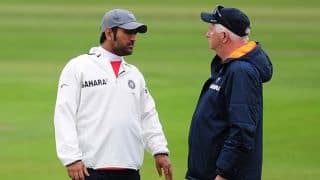 Time for BCCI to change its attitude and approach; bold steps need of the hour

CLT20 2011 Schedule: RCB to kick off against Warriors