England Women completed a 12 points to four Ashes win over Australia in their multi-format series with a seven-wicket Twenty20 victory at Chester-le-Street on Saturday. 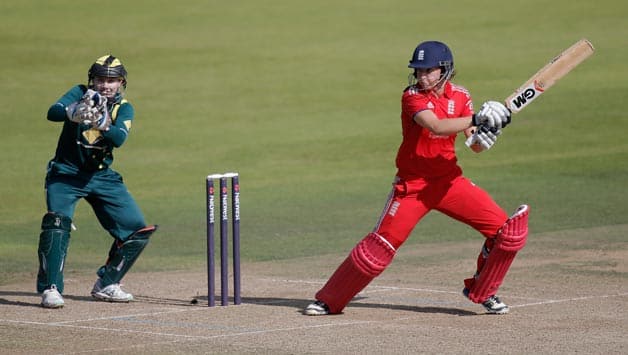 England Women completed a 12 points to four Ashes win over Australia in their multi-format series with a seven-wicket Twenty20 victory at Chester-le-Street on Saturday.

Australia could only manage 91 for seven in their 20 overs, with off-spinner Danielle Hazell taking two wickets for 20 runs in her maximum four overs and fast bowler Katherine Brunt, player of the match, taking one for 14 and running out Alyssa Healy.

England, in reply, collapsed to 14 for three before an unbroken stand of 78 in 77 balls between Lydia Greenway (35 not out) and Natalie Scriver (37 not out) saw the hosts to victory with 22 balls to spare as they won their fifth straight match of the series.

Greenway’s innings followed her England-record unbeaten 80 at Southampton and she once again proved up to the challenge of repairing an innings following the loss of early wickets.

This series was sweet revenge for England who lost the World Twenty20 final to Australia by four runs and then surrendered their 50-over world title to their arch-rivals in February.

“This is probably the proudest one of all, as to come back after the winter we’ve had is extremely pleasing for us,” said England women’s captain Charlotte Edwards at the presentation ceremony.

“We’ve just beaten the world champions quite convincingly in England; we celebrated on Thursday but we’ll celebrate hard tonight.

“The Test match seems a long time ago but the way the players have performed has been outstanding. The management have galvanised a team who were pretty low in confidence after the World Cup.”

Unlike the men’s Ashes, which England won after completing a 3-0 win in a five-match Test campaign against Australia, this series was played over all three main formats.

The women’s teams drew their lone Test before England took the one-dayers 2-1 and swept the Twenty20s 3-0.

Disappointed Australia captain Jodie Fields said: “We started the month quite well. We were happy with our performance in the Test match, but England have played some really consistent cricket.

“We’ve enjoyed the multi-format series but we need to come back, work hard in our domestic season and be ready for the January series at home.”