England need 109 runs to win the 14th match of the Women's WT20 against West Indies.

West Indies Women posted a target of 108/4 in their 20 overs against England Women in the 14th match of the Women’s World T20 2016 at the HPCA Stadium in Dharamsala. West Indies won the toss and elected to bat first. They were off to a good start as they were 9/0 in the first over. But lost the wicket of H Matthews in the 2nd wicket-maiden over from Katherine Brunt. Quintyne then joined Taylor at the crease. She looked in great touch as soon as she came out to bat.  She got the boundaries West Indies needed in the power-play and the total raced to 34/1 in 6 overs. But Taylor on the other end was going too slow, not getting runs off her bat. Slowly the run rate came down and West Indies were 44/1 in 9 overs as England bowlers started bowling in the right areas. LIVE CRICKET SCORECARD: England Women vs West Indies Women, 14th T20 Match, Group B, ICC Womens T20 World Cup 2016

Quintyne’s wicket came at just the wrong time for the West Indies as she was caught by Gunn off the bowling of Sciver. She went for 29 off 28. Dottin then came out to bat. West Indies were 62 for 2 in 12 overs and needed some runs in the final 8 overs of the innings. Dottin and Taylor were finding it tough to find the boundaries as the score read 79/2 in 15 overs. Although, a good 17th over yielding 11 runs gave the WI Women some boost.

For England Grundy finished with bowling figures of 0-22 and Brunt finished with 1-26. Shrubsole was good too. She ended with figures of 1-11. They need 109 runs to win in their 20 overs now. 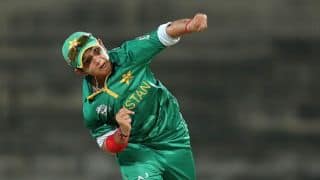