India's batting woes continued as the visitors suffered a humiliating 46-run defeat at the hands of England in the NatWest Women's T20 Quadrangular Series here on Sunday. 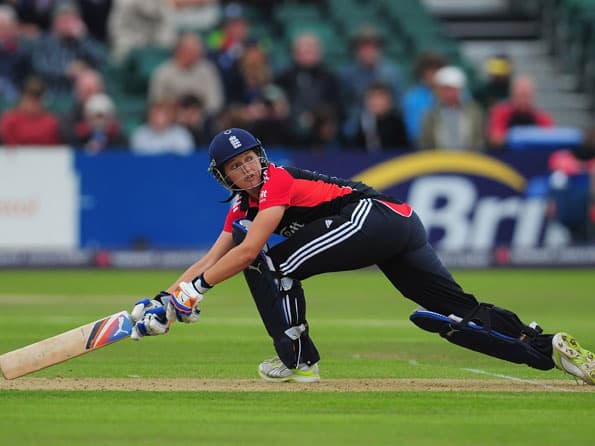 India’s batting woes continued as the visitors suffered a humiliating 46-run defeat at the hands of England in the NatWest Women’s T20 Quadrangular Series here on Sunday.

Electing to bat after skipper Charlotte Edwards won the toss, England rode on a superb 46-ball 66 by Sarah Taylor to post a competitive 134 all out in 19.5 overs.

The hosts then returned to restrict the Indian eves to a paltry 88 for eight in their stipulated 20 overs at the County Ground here to notch up their third win in the tournament.

Jhulan Goswami and Snehal Pradhan shone with the ball, scalping three wickets each, while Amita Sharma snapped two and Daina David accounted for one wicket.

But the batters failed once again to chase down a victory target of 135 as only five of their batsmen could reach double figures and that too below 20-run mark as India suffered their third successive loss in the tournament.

For England, Danielle Wyatt stole the show with the ball, taking two wickets, while Katherine Brunt, Arran Brindle, Holly Colvin and Danielle Hazell scalped one each.

However, it was Sarah who was the star of England’s win on Sunday as she blasted eight boundaries and involved in two crucial partnerships to anchor the home team to a competitive total.

India have lost all three of their T20 matches in the tournament.

India were thrashed by Australia by eight wickets in their opening match, while New Zealand beat India by 25 runs on Saturday.