So its all over. Play has been abandoned due to rain. No prospect of further play today.In D/L method the target for England was 112 at 30.1 overs. Eventually England Women win by 42 runs (D/L method) and take 1-0 lead in the three match series.

Rain stops play again with England Women require another 31 runs with 7 wickets and 11.5 overs remaining. They are 42 runs ahead in D/L.

Another one gone. Third wicket for India Women. Goswami takes the wicket of Lauren Winfield. England Women require another 36 runs with 7 wickets and 13.1 overs remaining. Still a comfortable situation for England.

Second one down for England. But its too late now. England only need 57 more runs to win.

Charlotte Edwards departs, she has played on. Ekta Bisht breaks the partnership. A bad shot from the England skipper. Exactly what India needed. Sarah Taylor the next batswoman and a poor misfield costs India a boundary.

England are well settled. They are cruising ahead. India are looking sad and lonely.

England have reached 50 mark and they are going strong. Heather Knight and Charlotte Edwards are well settled.

Match has been reduced to 42 runs. Only one run off the over.

Match has been reduced to 42 overs. Target is 184, according to Duckworth-Lewis method.

Heather Knight and Charlotte Edwards have been on their money. England Women are well ahead in Duckworth-Lewis method, as rain halts play for the third time today. England need 151 runs to win.

Short and half-volleys are costing India. Current run-rate is 9.55.

England Women openers are off to a good start. 19 runs off the first three overs and already four boundaries have been smashed. Things are not looking good for India Women. India need quick wickets now.

Shikha Pandey played an important knock on her debut in One-day International (ODI) cricket. She and Ekta Bisht got India past 190 mark. India finish with 193 for eight. Good comeback in the late overs by England. Though they need to bat well to reach 194 on this track.

OUT! Nagarajan Niranjana b Knight 4 (11)

Another wicket gone for India. Niranjana out to Knight. Third wicket in the match for her.

Seventh wicket gone for India, and it is the important wicket of Vellaswamy Vanitha, who was batting well.

Another bad call by the striker and Jhulan Goswami is ran out by Jenny Gunn.

Lovely shot by Smriti Mandhana. Danielle Hazell hit for a boundary. Smriti Mandhana uses her feet. No chance for the fielder to reach. Anya Shrubsole gave away 13 runs from her over. There was an appeal for LBW but inside edge. Matured batting from the Indians. Vanitha looks comfortable at the other end.

Heather Knight is introduced into the attack and a horrible ball by her and played poorly by Harmanpreet Kaur as Charlotte Edwards takes the catch at leg slip.

Smriti Mandhana brings her second ODI fifty. She has been the backbone of the Indian innings till now. Good front foot move.

Jenny Gunn breaksthrough the partnership between Mithali Raj and Smriti Mandhana. Good captaincy by Charlotte Edwards. A little nick, Mithali Raj caught behind by Sarah Taylor. Harmanpreet Kaur next batswoman to come in.

Natalie Sciver into the attack and wide from the first ball. Partnership between Mithali Raj and Smriti Mandhana is now 53 runs from 85 balls. A boundary in the over.

Match has been reduced to 47 overs per side. Rain has stopped. England Women practicing at the ground. Outfield is being roped by the to take moisture off.

The rain has stopped and we’re awaiting a restart at Scarborough. It’s fair to say it’s a bit cold… #bbccricket pic.twitter.com/fXE1hkFdK0

Things are not looking good at Scarborough.

One of the covers just blew off. That should give some idea of the weather conditions here in Scarborough. #EngWomen

Rain comes down again at Scarborough. Covers are on. Mithali Raj and Smriti Mandhana partnership – 47 runs from 12.5 overs.

Mithali Raj tries to go over the top, find the middle of the bat and one bounce to the boundary. Otherwisde, good tight bowling from Jenny Gunn and Danielle Hazell.

Danielle Hazell into the attack. Good international career she has had till now. Only two runs from the over. The partnership is now 21 runs from 35 balls. Jenny Gunn to follow.

Good first over by Katherine Brunt. Maiden after rain restarts following rain halted play. Anya Shrubsole continues. Good Work in the outfield by England Women players. Smriti Mandhana sneaks a couple of runs. Lovely shot by Smriti Mandhana. She moves to 11. Another four from her. She waits for the ball, and hits it.

The players are back on the field. India Women are struggling at the moment. Katherine Brunt to continue.

Rain getting heavier at Scarborough as umpires decide to stop the play. Good first six overs for England Women, good toss won by Charlotte Edwards. Thirush Kamini and Karuna Jain back in the pavilion. Mithali Raj has nicked a four and Smirti Mandhana finding it little hard to kick off.

Karuna Jain goes! Brilliant bowling from Shrubsole and fantastic catch from Heather Knight at slip. Mithali Raj walks in next with a big smile on her face. Watchful start from India. At the other end, Katherine Brunt is getting the length a little bit wrong. Leg-bye and one of the ball is pushed by Karuna Jain for four. Rain has picked up a little bit. Mithali Raj pushes one for four, slow and smooth. Elegant. Shrubsole was looking for the yorker.

Anya Shrubsole and Katherine Brunt are able to swing the ball a lot. The ball is swinging too much. Low scoring wicket. Thirush Kamini edges one of the ball and well caught by Sarah Taylor. Thirush Kamini not moving her feet.

Thirush Kamini and Smriti Mandhana are all set to bat. Katherine Brunt to bowl the first over. And there is swing! Good fielding by Lydia Greenway in the over. Glorious shot by Smriti Mandhana as the ball runs away to the boundary.

It is cold out at Scarborough. And here is the India Women playing eleven –

England Women have won the toss and skipper Charlotte Edwards have opted to field first. Following are the playing eleven of both the teams –

.@Lottie2323 has won the toss! #Engwomen to field first at Scarborough CC v India in the 1st RL ODI pic.twitter.com/yxOKqWXa0b

Hello and welcome to CricketCountry’s live blog of the first One-Day International between India women and England women at Scarborough. I am Sudatta Mukherjee and I will be bringing the live updates of the match. Indian women’s team is on a high after the Test win at Wormsley a few days back. It was an inspiring performance from the Indians. They were playing a Test after eight years with as many as eight debutants.

Though England are a strong team on paper, the only Test showed that things can be different in reality. Indian women would’ve taken a lot of confidence from that win and they will surely carry it along in the limited overs matches.

The team is scheduled to play three ODIs in the series. Two of them will be played at Scarborough and the tour will end with the third ODI at Home of Cricket, Lord’s. The series is part of the Women’s World Championships. So far one match has been played in the championship with Australia defeating Pakistan convincingly at Brisban today.

Here are some of CricketCountry’s features ahead of the ODIs:

Challenges for the women’s team ahead 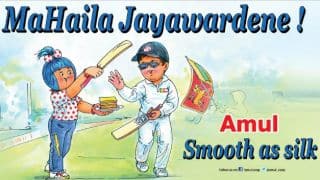 Mahela Jayawardene gets tribute from Amul 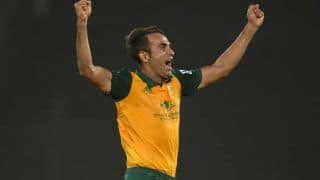