England posted a formidable 282 in 48.5 overs against India A at the Brabourne Stadium in Mumbai in their second and final 50-over warm-up match on Thursday.

England posted a formidable 282 in 48.5 overs against India A at the Brabourne Stadium in Mumbai in their second and final 50-over warm-up match on Thursday. Alex Hales continued with his good form and Jonny Bairstow scored a crucial half-century to warm up for the three-match ODI series, which begins on Sunday in Pune. While Hales and Bairstow made crucial runs, the failure of Eoin Morgan and Moeen Ali with the bat will certainly worry England as they head into what can be anticipated as a batting-dominated series against India. The hosts, led by Ajinkya Rahane, used as many as seven bowlers with Parvez Rasool being their best bet.

The Cricket Club of India did not witness as much frenzy as it did on Tuesday for the first match, which was the limited-overs captaincy swansong for MS Dhoni. The former India captain, along with the likes of Yuvraj Singh and several others who played in the first game, have already joined the rest of the Indian side for the first ODI. Ajinkya Rahane was appointed captain of this India A team, which consists of several youngsters including Rishabh Pant, who has been named in the T20I squad for the three-match series later this month.

It was England who won the toss and they were looking for some quality batting practise once again. England s confidence is high after making a winning start to the second leg of their India tour, beating the Dhoni-led India A in the first game by 3 wickets, chasing a little over 300.

Jason Roy and Hales once again provided a confident start, but their stand was not as big as it was in the first game. Roy was dismissed hit-wicket off Pradeep Sangwan in the seventh over, which provided India the first breakthrough. However, Roy showed ominous signs for India as he had raced to 25 off just 16 balls, hitting 6 boundaries in the process.

Hales was joined by Bairstow post Roy s dismissal. Bairstow was one of England s best batsmen in the Test series and it was important for him to get runs in the only warm up game he played. The wicketkeeper-batsman, who may feature in the playing XI purely as a batsman, top scored with almost a run-a-ball 64 with 10 boundaries. He added 74 runs for the second wicket with Hales to solidify England s innings.

However, England slipped from a comfortable position as Hales and Morgan were dismissed in quick succession. Shahbaz Nadeem accounted for both the English batsmen as he got Hales caught by Rahane for 51, whereas Morgan gave a return catch to the spinner on his first delivery itself. Hales struck 8 boundaries during his stay at the crease. Morgan had flopped with the bat in the first game as well.

England were steadied by Bairstow and Ben Stokes a familiar combination as far as Indian bowlers are concerned. These two had several significant partnerships in the five-Test series and they came to England s rescue once again. Stokes and Bairstow added 47 more runs to the English total.

The visitors had further trouble in store when Jos Buttler and Moeen Ali were dismissed within a span of a few deliveries. Buttler, like Morgan, fell for a first-ball duck. Moeen managed only 1 off 4 balls before he was removed by Ashok Dinda.

It was England s lower order which came to their rescue and pushed their total close to 300. Chris Woakes hit 3 boundaries to score 16 off 17 balls. Adil Rashid and David Willey had some fun late in the innings. While Rashid scored 39 with 2 boundaries, Willey got to 38 not out with the help of 2 boundaries and 2 sixes. 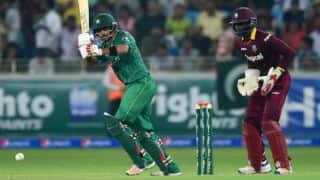 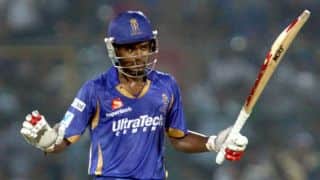