Hales among a number of overseas cricketers who left the PSL last week due to uncertainty over travel restrictions and possible quarantine scenario.

England batsman Alex Hales on Tuesday said he has gone into self-isolation due to fever and persistent dry cough after returning midway from the now-postponed Pakistan Super League (PSL). However, Hales is yet to get himself tested for the dreaded COVID-19 virus which has wreaked havoc all around the world.

Hales’ statement comes after PSL, which he was a part of, was postponed with the Pakistan Cricket Board (PCB) saying that a foreign player showed symptoms of Coronavirus. Former Pakistan captain Ramiz Raza went on state that the player is be none other than Hales.

“Like many other overseas players, I reluctantly left the Pakistan Super League early because with COVID-19 reaching global pandemic status, I felt it was more important to be with my family rather than face a period of lockdown thousands of miles from home,” Hales said in a statement after the PCB’s comment.

“I returned to the UK in the early hours of Saturday morning feeling perfectly fit and healthy and with absolutely no symptoms of the virus,” he added.

An update on my situation, stay safe everyone pic.twitter.com/8mDPOBGmI8

The 31-yer-old Hales represented Karachi Kings in the PSL 2020. He was among a number of overseas cricketers who left the PSL last week due to uncertainty over travel restrictions and possible quarantine scenario.

“At this stage, it has not been possible to be tested although I am hopeful that might be the case later today so I can get absolute confirmation of my current health status,” he added.

The PSL had entered the knockout stages and semifinal matches were due to be played on Tuesday and final on Wednesday in Lahore. The PCB had also shortened the league by four days considering the worsening coronavirus situation before finally calling it off.

Fever and dry cough are among the symptoms for COVID-19, which has so far claimed more than 7,000 lives globally. Fever, dry cough and shortness of breath are some of the symptoms of the viral disease, which infected more than 170,000 people worldwide. 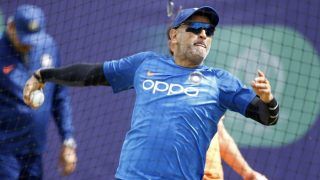