Widely considered among the finest batsmen in the world today, Steve Smith admitted there had been "dark days" since as he grappled with his fall from grace owing to the ball-tampering/sandpaper scandal.

Widely considered among the finest batsmen in the world today, Steve Smith admitted there had been “dark days” since as he grappled with his fall from grace owing to the ball-tampering/sandpaper scandal.

ALSO READ: I had the opportunity to stop it and I didn’t do it: Steve Smith on ball-tampering plan

Speaking to the media for the first time since his tearful apology in March earlier this year, Smith spoke been hard watching Australia struggle from the sidelines and how he is preparing for his return.

ALSO READ: Steve Smith in TV ad: It’s ok to be vulnerable, I want to come back better than I was

But with his suspension running out at the end of March, Smith now can see light at the end of the tunnel and is desperate to return, with the World Cup and the Ashes next year in his sights.

“I’m just moving forward day to day, and doing what I need to do to prepare to hopefully get another opportunity to play for Australia,” he said.

“And if that’s World Cup and Ashes, so be it. And no doubt the English crowd will be incredibly hostile. I’m ready for that, if that happens.”

He has spent the time away playing for his grade cricket club Sutherland, which he captained to the New South Wales Premier T20 championship on Sunday at the Sydney Cricket Ground.

Smith has also had stints in Canada’s Global T20 competition and in the Caribbean Premier League.

But he suffered a setback this week when he was barred from the upcoming Bangladesh Premier League T20 tournament on a technicality.

Some of the hardest times during his ban came when the diminished Australian team struggled in his absence.

“It’s been tough at times, particularly when the boys haven’t played their best in a couple of games, it’s been hard watching and knowing that I can’t go out and help them,” he said.

“But I was really proud of the way they played last week in Perth (during the second Test against India, which they won).

“I thought they were magnificent. I think Tim Paine’s leadership has been exceptional since taking over as captain,” Smith added. 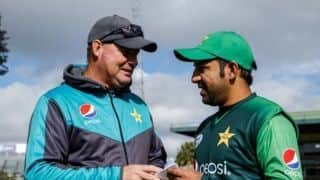 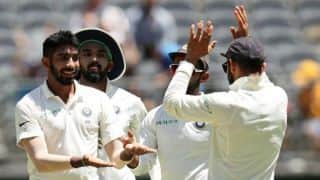