Kolkata: England captain Eoin Morgan said that all-rounder Ben Stokes will be devastated after being hit for four sixes by Carlos Brathwaite in the final of the ICC World T20, here tonight. Asked how is Stokes coping with the disappointment, Morgan replied:”It’s quite simple from my point of view. He is going to be devastated. It’ll take its toll in the next couple of days. but we share the pain, we share the success. You could say what you like to him at the moment but he’s probably not hearing it.” FULL CRICKET SCORECARD: England vs West Indies, ICC World T20 2016, Final at Kolkata

Morgan said that cricket can be a cruel game despite them having control for the better part of the West Indies innings. “It’s possible. It just happened. Cricket can be a cruel game. I thought we did extremely well with the ball. At no stage, did the West Indies get anywhere near whey they wanted. “I don’t think we felt rushed at all with the ball. I thought we actually had the crowd on our side. And they responded to us. Everything worked in our favour.” T20 World Cup 2016 Final: Eoin Morgan blames England’s batting for loss to West Indies

Morgan said that perhaps West Indies never thought they were out of the game. “I don’t think the game is ever gone. I certainly think the physical game of every international cricketers, not only the strength but the timing so you never feel that far away from getting leathered. I’d love to know. I’d love to be able to do it. He’s an incredibly talented cricketer. Like any fantastic cricketer, they keep things incredibly simple.”

But Morgan said that he is proud of his players. “As a whole. I am very proud of my players. I said that yesterday before the game. Today was about letting ourselves go and play with the freedom. I m extremely proud. This is the beginning of something I hope is going to be special. Let’s hope we can keep this group of players together for a long time.” 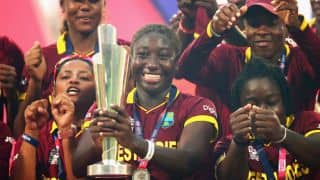