Eoin Morgan was left devastated and extremely frustrated after heavy, persistent rain resulted in the abandonment of their first ODI vs Sri Lanka

England captain Eoin Morgan was left devastated and extremely frustrated after heavy, persistent rain resulted in the abandonment of their first ODI against Sri Lanka in Dambulla on Wednesday.

Morgan would have been ruining what could have been as England were off to a solid start after being sent in by Sri Lanka captain Dinesh Chandimal. The opening pair of Jonny Bairstow (25) and Jason Roy (24) were separated after a 49-run partnership. Morgan (14*) and Joe Root (25*) then came together at 51/2 and got a start taking the score to 92/2 in 15 overs when rain halted their progress.

It s extremely frustrating, especially when the umpires made a really good decision to get the covers on before the rain actually started, Morgan said. When it rains here it just doesn t stop for hours. They did their best but unfortunately when they were taking the covers off there was a lot of overflow and three or four areas of concern, that were very muddy.

While expressing his disappointment, Morgan is hopeful luck will be on their side but knows this is not the first time when inclement weather will have its impact on the matches.

When it gets to that stage player safety is paramount and I think the umpires made the right call. I think it s going to be that type of series. There was no rain forecast for today which is devastating, we are keen to get ourselves into the series and get going and playing but hopefully we will have a bit of luck along the way with the weather, he said.

Before the ODI washout, England have already seen one of their two warmup fixtures falling prey to rain. Only two ODIs of the five-match series – 2nd and 4th have a reserve day but Morgan is still optimistic.

No, I m not worried, not at all. I d hate to sound pessimistic. The two games where we have reserve days we ll get some form of game in and let s hope that the weather is okay. We did come here in 2014, a little bit later, but I remember the forecast being the same every day and we just managed to miss the rain.

The second ODI will be played on Saturday at the same venue. 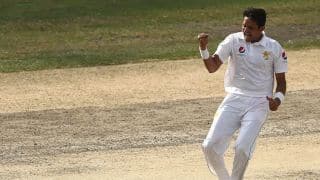