Eoin Morgan: Kolkata Knight Riders will be positive and will play their best cricket in remaining matches

Eoin Morgan: Kolkata Knight Riders will be positive and will play their best cricket in remaining matches

Virtually out of contention for a berth in the four-team play-offs, Kolkata Knight Riders' batsman Eoin Morgan said his team was not going to sit and sulk, and instead look to give its best in the remaining matches. Virtually out of contention for a berth in the four-team play-offs, Kolkata Knight Riders‘ batsman Eoin Morgan said his team was not going to sit and sulk, and instead look to give its best in the remaining matches.

“I think from here it makes us a dangerous side. Teams will take us lightly and it gives us an extra bit of positivity than anything else. We are not going to sit and sulk about it,” he said.

“From here, we are going to look at things in a positive way and hopefully play our best cricket because we haven’t done that so far,” Morgan said at the post-match conference.

Mumbai Indians outplayed Kolkata Knight Riders by 65 runs  on Tuesday night  to hand over the defending champions their eighth defeat in 12 games so far.

“We are very disappointed with the way we performed. We haven’t shown enough skills to be able to compete on a consistent basis. We have shown glimpses of it throughout this tournament, but the consistency hasn’t been there,” said Morgan.

After posting a challenging 170, Mumbai Indians bowled out the Knight Riders for 105 in 18.2 overs, and the 26-year old English player felt that the target was achievable had they built a good partnership.

“It was definitely a chasable target. Where we went wrong was where we lost wickets continuously. We never managed to get a substantial partnership going. I have played enough times to know, when you have got a good partnership going, you can up the rate and from there, you can turn the pressure around to the fielding team,” he said.

The Knight Riders’ bowler Ryan McLaren conceded 25 runs in the final over but Morgan defended the bowler, saying, “I think it was certainly a chasable target, obviously 25 from the last didn’t help. We had different periods of the game where we bowled well and made up for it.”

“They got off to a fantastic start and we started taking wickets one after the other. In one over I think we took three wickets and then the last over, if we [Sunil Narine] had held the catch [of Dinesh Karthik], things might have turned around. In T20 it happens that way. Things can all of a sudden turn around.”

Asked if it was wise to leave out Sri Lankan spinner Sachitra Senanayake for the game, as the Mumbai spinners shared five wickets between them, Morgan said the ball started to turn only in the second innings.

“I don’t think so. I think the guys who came in did really well. Certainly bowling first upfront on that wicket did show nice swing, pace and bounce. Weirdly here, it got a bit drier [later], because it didn’t turn that much for our spinners and it did get drier as the game went on.

“We did say that, but the rate kept creeping up and we had no option but to keep as positive as we were. No doubt it was difficult,” he said.

Morgan, who had led England to victory with a last ball six in a T20 match against India at the same stadium, said the wicket was different from the last time he had played here.

“From the last game [I played in December] it was a lot different. There was more dew around the ground and the ball came through with a bit more pace. Tonight was a bit more slower and tonight’s wicket turned,” he said.

IPL: The heady cocktail of cricket and Bollywood 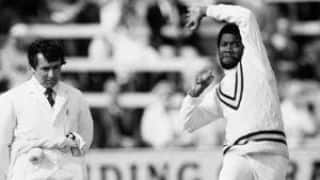 When West Indies pummelled New Zealand in their own backyard