Eoin Morgan, after a dry spell having been reduced to taking singles went after Ravindra Jadeja’s bowling, smashing a asix and four in the 16th over to get the score a move on. Karan Sharma contined on what has been a excellent debut and gave a away a measly 3 runs in the 15th over. Karn however erred in the 17th over where he was carved apart for 20 runs by Morgan and Jos Buttler, who smashed a six each and his figures were ruined by the end of his spell.

England continued to struggle for runs in the Only T20 International at Edgbaston and Ravichandran Ashwin, after struggling with his line early on bowled a tidy over to put pressure on the English batsman.Seven runs came of the over and Ravindra JAdeja, in typical fashion harried and stifled the batsmen and gave nothing away as big hits continued to elude the English batsmen in the only T20.

Earlier, England won the toss and chose to bat first. Jason Roy made his debut for England. For India, Ambati Rayudu and Karn Sharma made their T20 International debuts. The captains, MS Dhoni and Eoin Morgan are playing their respective 50th T20 Internationals. Morgan has played a few for Ireland though. Dhoni has played 49 of those as captain. 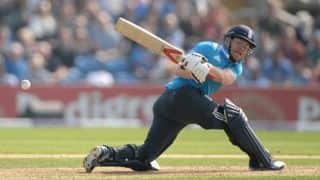