Malinga once again clawed England back as the Lankans registered nine-run win.

Eoin Morgan was left marvelling at the skill of rival captain Lasith Malinga after the Sri Lanka skipper played a key role in the tourists’ nine-run Twenty20 international win at The Oval. Malinga, who led the islanders to World Twenty20 glory in Bangladesh earlier this year, had long been regarded as one of the best ‘white ball’ bowlers in the game. And the ‘slingshot’ seamer proved too hot for England to handle in taking three for 28 on Tuesday as Sri Lanka restricted Morgan’s men to 174 for seven in reply to their 183 for seven.

“It’s not often in Twenty20 cricket that you can get dominated by a bowler so much as Malinga,” said Morgan. “But he crops up in everyone’s team meeting. He’s someone you have to talk about a lot, how you’re going to negotiate him — if you have the option of taking him on. He’s world-class,” the former Ireland batsman added.

Tuesday’s match was the first Twenty20 England had played since Peter Moores was re-appointed national coach. Morgan, leading the side in the absence of the injured Stuart Broad, was left frustrated by a bowling display which, with the exception of debutant left-arm seamer Harry Gurney (two for 26), was powerless to prevent a late onslaught that saw Sri Lanka score 75 runs off the final six overs of the innings. Fielding errors also hurt England, with Michael Carberry dropping left-hander Thisara Perera, whose 49 proved decisive.

Alex Hales, who became the first England batsman to score an international hundred in this format when England recorded a shock win over Sri Lanka during the group phase of the World Twenty20, weighed in with 66 on Tuesday but the hosts still fell narrowly short of their target. However, Morgan was clear a lack of penetration with the ball had proved England’s undoing — and not for the first time.

“I think our bowling has let us down for quite a while now. We’ve always managed to either get up there with the chase, and (just) fall short, or set a good score.  Our batting is quite strong. We bat all the way down.  But it’s just been disappointing today (Tuesday) that the skill level wasn’t as high,” he said.

As for Carberry’s dropped catch, where the opener wasn’t helped by his captain coming into his eyeline at the vital moment, Morgan said: “I went for it initially — shouted for it — and as I got closer, ‘Carbs’ kept shouting his name. So I stood as close as I could to him, to try to get a rebound if he happened to drop it.  People drop catches all the time, and that one was quite costly.”  Morgan added: “We’ve just lost the game, so I’m very disappointed. I think it’s a game we should probably have won as well.”

England have a chance to make amends when they return to The Oval on Thursday for the first of a five-match one-day international series with Sri Lanka, who they will also face in two Tests next month. 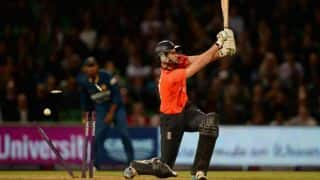