England captain Eoin Morgan played a wonderful cameo and was supported wonderfully by young Jos Butler in the dying moments of the game as England secure a six wicket win with a last ball six against India at Mumbai. 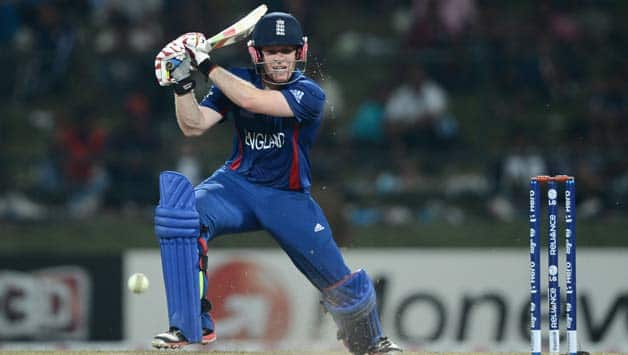 England captain Eoin Morgan played a wonderful knock and was well supported by young Jos Butler in the dying moments of the game as England secured a six-wicket win with a last ball six against India at Mumbai on Saturday.

Morgan scored an unbeaten 49 off just 26 deliveries to clinch a nail-biting finish in England’s favour. He was well supported in the end by Butler who scored 15 off seven deliveries.

Yuvraj Singh, who displayed an all-round performance in the first T20 against England at Pune, chipped in with the ball to bring India back into the game after the England openers scored 90 runs in the first 10 overs.

He first removed half-centurion Michael Lumb, who came down the track and missed a spinning delivery and was stumped by Dhoni. Two overs later, Yuvraj skid one through to clean up Luke Wright and leave England at 94 for two off 11 overs, still needing 84 runs off the last nine overs. Yuvraj struck for the third time in the game just three overs later as Alex Hales tried to play a slog sweep and hit the ball straight to Ashok Dinda. Two overs later, Dinda struck with the ball to dismiss Samit Patel, leaving England at 149 for four off 17.5 overs.

England needed 29 runs off 13 deliveries when Butler walked in and India would’ve backed themselves to win the series 2-0 only to be disappointed, courtesy Morgan.

Needing nine runs off the last over, Morgan and Butler managed only six off the first five deliveries. Dhoni delayed the last delivery as he got into discussions with some of his players but the defeat was inevitable as Morgan hit the final delivery straight back over the bowler’s head for a six to seal the win.

Earlier, after a good start by Virat Kohli, seasoned T20 batsman Suresh Raina and captain MS Dhoni tormented the England bowling attack to take India to 177 for eight in 20 overs.

Dhoni scored 38 off just 18 deliveries as he put on 60 runs off just 27 deliveries with Suresh Raina for the sixth wicket. Tim Bresnan dismissed the Indian captain in the penultimate over.

England will be pleased with their efforts as they sign off an extremely successful series with a well deserved victory.