Eoin Morgan had earlier missed out the 2nd T20I at Dubai which also had a nail biting finish.

Sharjah: England Twenty20 captain Eoin Morgan Tuesday described his team’s progress in the shortest form of the game as “pretty exciting” but refused to get carried away despite sweeping Pakistan 3-0. England won the third and final match in a thrilling Super Over finish after the regulation match was tied in Sharjah on Monday. The victory lifted England from a pre-series eighth position to fourth in the world Twenty20 rankings. LIVE CRICKET SCORECARD: Pakistan vs England 2015, 3rd T20I at Sharjah

“I think we’re still in the development stage,” said Morgan. “But it’s pretty exciting, the acceleration of our learning curve is happening quite quickly because we’re winning, we’re growing in confidence, building momentum. We’re learning as much as we can from each other as opposed to back-tracking and learning from opposition the whole time,” added Morgan.

England had a miserable World Twenty20 competition in 2014 — losing three of their four games — and were also ousted in the first round of the 50-over World Cup this year. But since then there have been signs of a transformation, said Morgan, who is also England’s one-day international captain. “Not to get too carried away, I think this is the start of something. We’ve built a great base to start on, guys are contributing to performances all the time and it’s not easy to do when you’ve such a young side,” he said.  ALSO READ:Pakistan vs England 2015, 3rd T20I at Sharjah: James Vince’s steadying knock, Shoaib Malik’s valiant top-score, Chris Jordan’s constricting super over and other highlights

Morgan explained, “When we started at the beginning of the summer, I reckon we had five guys who’d played less than ten games. Hopefully this time next year they’ll have played 30. It’s important we keep these 17-20 players together and get as much experience together as we can.”

Morgan said his team would stand a good chance in next year’s World Twenty20 in India if they do well on their tour of South Africa starting later this month. “If we can take this form into South Africa and on from there, who knows? We’re in the best position we could be at the moment. We’re a very new side, we’ve only played five games together as a squad, but we’re in the best position we can be with our side,” said Morgan whose team have now won their last six Twenty20 matches. ALSO READ: England win super over to clean sweep T20 series against Pakistan

“I think collectively as a group we’re quite exciting. We have 15 athletes, fitness is a priority of ours, we’re always striving to improve our fielding. I suppose the toughest thing we were going to encounter was the conditions, playing Pakistan on home soil is a very difficult task. We’ve countered that to a certain extent, but we haven’t played a complete performance throughout both series,”concluded Morgan. 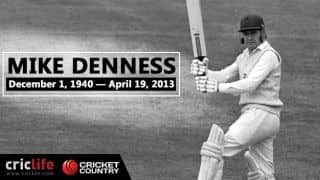