Former players and the media trained their guns on India's powerful cricket board Sunday after Mahendra Singh Dhoni's team slid to another humiliating series defeat overseas. 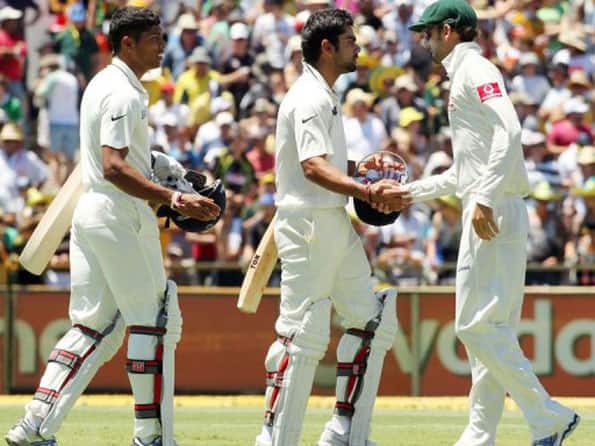 Former players and the media trained their guns on India’s powerful cricket board Sunday after Mahendra Singh Dhoni’s team slid to another humiliating series defeat overseas.

Australia smashed India by an innings and 37 runs inside three days in the third Perth Test on Sunday to clinch the four-match series, after winning in Melbourne by 122 runs and Sydney by an innings and 68 runs.

It was India’s seventh successive loss abroad, following their 4-0 rout in England last year, in a dismal run that has taken the sheen off their limited-overs World Cup victory last April.

As the nation debated the future of ageing batting greats, Sachin Tendulkar, Rahul David and Venkatsai Laxman, the cash-rich Board of Control for Cricket in India (BCCI) was trashed for its short-sighted policies.

“They (BCCI) is doing extremely well when it comes to making money and controlling world cricket,” said former captain Kapil Dev. “But what is the use if your team fails to win matches abroad?”

“I am saying this with a heavy heart, but once the IPL comes around in April, every Test defeat will be forgotten,” Bedi told AFP. “The game has been badly damaged by the BCCI.”

Others felt the BCCI was so occupied with making money and promoting the IPL that it failed to plan a transition period for when Tendulkar and other veteran batsmen wane.

“Indian cricket s problem is not much shortage of talent as self-delusion,” said noted sports critic Ayaz Memon. “Being the richest in the world is not necessarily synonymous with the best.

“Building a truly great team needs long-term vision, rigorous planning, strong leadership and some luck with the right talent coming together at the same time.”

Former captain Sourav Ganguly said India were never the best Test side in the world, despite the number one ranking it held for close to two years until their demolition in England.

“You can never be the best if you don’t win abroad,” said Ganguly, India’s most successful Test captain. “India have not just lost in England and Australia, they have been drubbed.”

Ganguly joined the growing chorus to rebuild a side currently staffed by senior players who are nearing the end of their careers.

“We will definitely have to make big changes after the current tour,” he said. “Otherwise good luck to Indian cricket.”

With India not due to play an overseas series until the tour of South Africa in late 2013 and the next home series still seven months away, the selectors were urged to use the opportunity.

The immediate concern was the future of Dravid and Laxman, who have had a poor run in Australia, even as Tendulkar appeared in good form despite failing to score his 100th international century.

“They have served India so well in the past, but they can’t go on for ever,” said former team-mate Sanjay Manjrekar. “The selectors must take a call to blood younger players.”

Dravid turned 39 this month, Tendulkar will reach the same age in April, while Laxman will be 38 later in the year. (AFP)