Prabhsimran Singh has been given a debut by Kings XI Punjab for their IPL 2019 contest against Sunrisers Hyderabad at the Rajiv Gandhi International Stadium on Monday.

Prabsimran has played only four List A matches before the IPL 2019 Auctions and was part of the Indian team which finished a runner-up at the ACC Emerging Teams Asia Cup in Sri Lanka. The Punjab batsman idolises explosive Virender Sehwag. The attacking batsman scored 298 runs for his side in the Under-23 tournament.

In the Cooch Behar trophy in season 2017-18, he scored 547 runs for Punjab, hitting three centuries.

Prabsimran hails from Patiala and came in the limelight with a 298 in age-group cricket during the Punjab U23 Inter-district cricket tournament last year, that came off just he was ignored by selectors for the India U-19 team s tour to Sri Lanka. 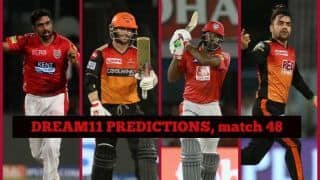