Former England and Gloucestershire off-spinner David Allen has died aged 78, the West Country County have announced. Allen played 39 Tests for England in the 1960s, when he faced tough competition for a place from off-spinners such as Fred Titmus, Ray Illingworth and John Mortimore, a team-mate at Gloucestershire.

He took 122 Test wickets at an average of 30.97, with four five wickets in an innings returns. Allen also scored 918 Test runs, including five fifties, with a best of 88.

But perhaps his best known batting feat at international level was to block out the final over from West Indies fast bowler Wes Hall, when Colin Cowdrey had come back in as last man at the non-striker’s end after retiring hurt with a broken arm earlier in the innings, to ensure a draw in the Lord’s Test of 1963.

Bristol-born Allen played for Gloucestershire, his native county, from 1953-1972, taking 1,209 wickets and scoring over 9,291 runs in First-Class cricket. He subsequently became Gloucestershire’s president in 2011.

“Gloucestershire County Cricket Club is saddened to announce the death of former player and club president David Allen at the age of 78,” said a statement on the County’s website. “Our sincere sympathy goes out to his family and friends.”

Allen’s death came just a few months after his fellow Bristol-born bowler Mortimore, with whom he formed a highly effective partnership at county level, died aged 80 in February. 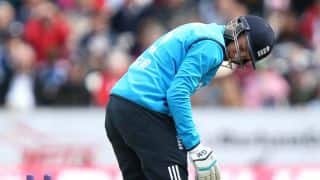