Excitement was building in cricket-loving parts of Afghanistan ahead of their historic one-day international against Pakistan in Sharjah on Friday -- even among Taliban insurgents. 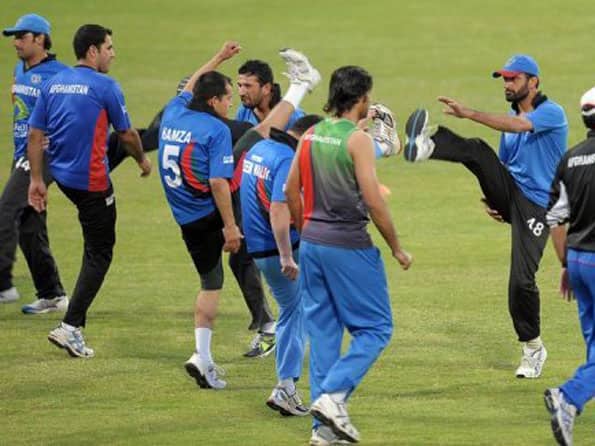 Excitement was building in cricket-loving parts of Afghanistan ahead of their historic one-day international against Pakistan in Sharjah on Friday — even among Taliban insurgents.

“I am personally a fan of cricket, I will follow this match closely,” Taliban spokesman Zabiullah Mujahid told AFP.

Asked which side he would support, given reported backing for the insurgents from within Pakistan, he replied: “I pray that Afghans come out as winners.”

Mujahid, who usually speaks to the media on his mobile phone about the state of the war, made the point that he was speaking in his personal capacity, not on behalf of the Taliban.

Afghanistan have played 18 one-day internationals since gaining status in 2009 but all their matches were against associate and affiliate teams Canada, the Netherlands, Ireland, Kenya and Scotland.

Now they face their first game against their neighbour, one of the world’s great cricketing nations.

Friday’s match in Sharjah Stadium is fitting because most of the Afghan players learnt the game in Pakistan while staying as refugees after the Soviet invasion of their country in 1979.

The game has a limited following in the capital Kabul but a strong following mainly in the south and east of the country, near the Pakistan border.

“Everybody loves cricket here,” said Masoom, the owner of TV and satellite dish store in the southern provincial capital of Kandahar.

“I have sold a dozen dish sets in recent days because people are concerned the local TVs will not have a live broadcast.”

“Whenever there is a cricket match here, people all forget about war, poverty or other miseries,” said a customer who gave his name as Sami.

“Everybody looks so happy that you’d think there is no war in this country.”

In the eastern city of Jalalabad, cricket fan Sedaqat Ghorzang said Friday would be an important day for all Afghans.

“We want to forget about war and watch this interesting match, we will win inshallah (God willing).”

Afghanistan gained a notable foot up on the world cricket stage by finishing fifth in the 2011 World Cup qualifiers which earned them the right to play One-Day Internationals.

Afghanistan, one of the 59 associate members of the International Cricket Council (ICC), are also the title holders of the Inter-Continental Cup meant for the Associate nations.

The ICC, which contributes approximately $700,000 a year to help Afghanistan’s development in cricket, has shown great delight in their progress, terming it as “a success story in cricket”.(AFP)

Titans in command against Cape Cobras in SuperSport Series final