The Committee of Administrators (CoA) chief Vinod Rai today clarified that Sachin Tendulkar, Sourav Ganguly and VVS Laxman will continue as members of Cricket Advisory Committee (CAC) till the new BCCI constitution is adopted and the elections take place.

The COA members Rai and Diana Edulji along with Chief Executive Officer Rahul Johri today met in Delhi to firm up the new constitution as per Supreme Court order earlier, this month. Asked if a new CAC will be formed, Rai told PTI: “As of now, the existing CAC will continue. Our counsel had sought clarification from the court and when they came to know the existing composition of the CAC, they gave us permission to continue with Sachin, Sourav and VVS till elections are held.”

There were a few questions raised with regards to Conflict of Interest as Ganguly is also the president of Cricket Association of Bengal (CAB), Laxman is a mentor with IPL team Sunrisers Hyderabad apart from being a part of CAB’s VISION 2020 project. As far as Tendulkar is concerned, his son Arjun has recently made his U-19 international debut in Sri Lanka.

This effectively means that the legendary trio would be entrusted with the duty of taking all cricket related policy decisions including the choice of two new selectors. However, they might not need to take a call on the chief coach of the women’s team as Ramesh Powar’s tenure of appointment till Women’s World T20 coincides with incumbent elections.

While Indian team has done well in the ongoing third Test, Rai said that performance in the first two Tests was not discussed by the COA in today meeting. “There wasn’t any discussion held on India’s performance today. Our main focus was on getting the constitution ready. Yes, India’s performance will be analysed but only once they finish the tour,” the former CAG said.

Rai said that the constitution with all necessary incorporations from the latest Supreme Court order will be ready in the next couple of days. “We are almost ready with the new constitution and it will take may be another couple of days,” Rai said. 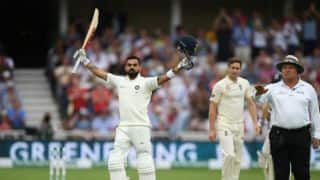