Richards is impressed with the kind of reception the T20 league has received in its inaugural edition.

The Mzansi Super League has West Indies legend Viv Richards excited. Richards, a two-time World Cup winner is impressed with youngsters making the most of the opportunities provided in the absence of mainstream South African players, who were away on national duty in Australia. In his column for the Times of India, Richards expressed delight at the kind of reception the T20 league has received in its inaugural edition.

“The inaugural season of South Africa’s T20 league kicked off with amazing matches, great crowds and genuine interest from cricket fans, but I believe, the best is yet to come. With the Proteas on National duty, it was the perfect pitch for the rookies to hit the ball out of the park and with what I had seen, some of them did exactly that,” Richards said.

“The international stars rose to the challenges, the likes of Asif, Duckett with the bat also Maharaj and Smutts with the ball. But with more players arriving, I look forward to seeing some cracking games.”

In five matches so far, Cape Town Blitz, Nelson Mandela bay Giants, Tshwane Spartans and Jozi Stars have registered wins and the likes of AB de Villiers and Dale Steyn have already up and running with impactful performances. Besides, Keshav Maharaj picked up 3 for 24 for Durban Heats against Cape Town, while England batsman Ben Duckett scored 75 for Giants against Stars.

Richards expects the return of Faf du Plessis and David Miller to add more spice to the tournament. Both batsmen scored centuries in the decider of the three-match ODI series against Australia that helped South Africa clinch the series 2-1. du Plessis will return to captain Paarl Rocks while Miller will play for the Durban Heats.

“The Proteas are back home after a successful series in Australia. Faf and Miller were on fire during their tour. I am expecting to see some exceptional fireworks with all the world class batsmen on show. Kagiso Rabada who was SA’s best bowler along with Steyn in Australia, will definitely look to test the batsmen,” Richards said. 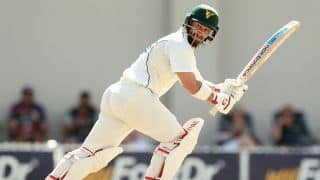